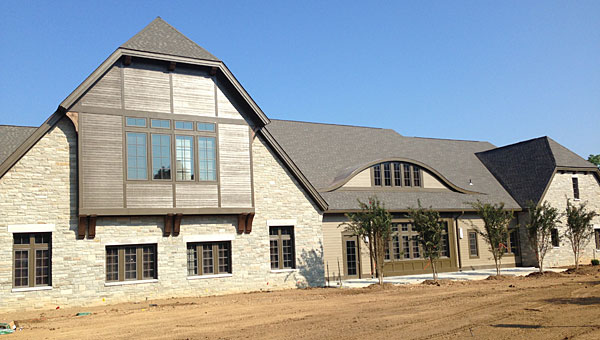 Alabaster’s new City Hall, which is off 11th Avenue, will be completed in the next few weeks. (Contributed)

Alabaster court days and City Council meetings soon will move to a new location, as the city is preparing to move to its new City Hall in the next few weeks.

During a Sept. 3 pre-City Council meeting work session, City Manager George Henry gave council members an update on the new building, which is next to the Alabaster Senior Center off 11th Avenue.

The council’s last meeting in the Municipal Annex, a former church building behind the current City Hall on U.S. 31, likely will be on Sept. 16. The first council meeting in the new building is planned for Oct. 7.

“On (Sept.) 9, they will put the final seal coat on the parking lot, and on the 16th, they will stripe it,” Henry said of the new City Hall. “So weather permitting, after the 16th it will be completely finished.”

This week, crews are working to install the last bit of security and audio-visual equipment inside the building, and likely will begin moving the city’s Building Services Department to the new City Hall next week.

Landscaping crews are also putting the finishing touches on the new building this week, Henry said.

“If you go out there on Friday, it will look like a finished building from the outside,” Henry said.

Henry also said he is working with Shelby County Historical Society President Bobby Joe Seales to place photographs and information about historical Alabaster figures, such as Albert Scott, in the new City Hall.

The front of the building, which faces the Buck Creek Trail, features two public entrances: One to access the city’s administrative offices and another to access the courtroom and the second-floor Alabaster City Schools central office.

Henry said the Building Services Department and the Alabaster Board of Education will move in first, followed by the city’s administrative offices.