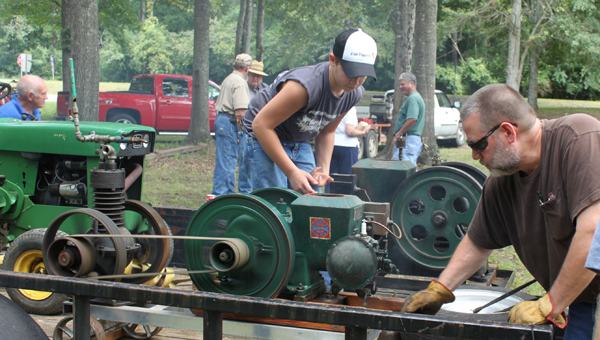 SHELBY – Antique engines of all kinds will be on display at Iron Works Park Sept. 7 from 9 a.m.-5 p.m. as the Historic Shelby Association hosts its second of three annual fundraisers. The event will also include blacksmith, gristmill and sawmill demonstrations.

HSA board member and historian Jerry Willis encourages community members to “bring your engine, find a shade, set up and run it,” as the engine show is made possible only by community members bringing engines to show, Willis said. Willis, who has been an old engine enthusiast for years, plans to show a steam engine.

The Iron Works Museum will also be open during the day for visitors to learn more about the history of the park and the Shelby community, although museum curator Daniel Valles says he expects to spend most of the day in the kitchen cooking hot dogs. While admission is free, the Company Hall kitchen will sell hot dogs and hamburgers to raise money for the organization.

“We’ll have everything from small utility pumps you’d use on a well to large machines that take up almost an entire trailer, many of them operating and running,” Valles said.

For the blacksmith demonstration, Valles said two to three blacksmiths would make different knick-knacks all day long, including hangers, fire pokers and other objects.

“You can see them take a raw chunk of metal and heat it and shake it and do all of their magic to it,” he said. “People gather around and watche them and asks questions.”

The sawmill demonstration will involve community-donated logs that will be cut into boards and beams, he said.

Halles said the show often attracts engine enthusiasts who show their engines at other shows, too, and sometimes people will come with “a trailer load full of engines.”

“You never know what’s going to show up,” he said.