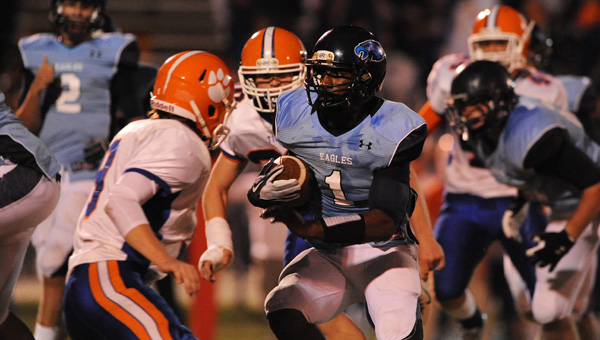 Calera’s Ronnie Clark evades tacklers in a 2012 matchup with Chilton County High. The Eagles were named to the No. 1 ranking for the first time since 1982 on Sept. 4. (File)

All year long, every football team strives to be No. 1 at the end of the season, but what about being No. 1 just a week in?

Not so much, if you ask Calera head coach Wiley McKeller. The Eagles are ranked at the top spot in the latest Alabama Sports Writers’ Association poll for AHSAA Class 4A, and while honored, McKeller said he had a unique way of looking at the ranking.

“It’s kind of like waking up Christmas morning and finding a can of pork and beans in your stocking,” he said, laughing.

The Eagles are coming off an opening week victory that saw them defeat Holt 69-0.

Although nice that people recognized where the program is headed, the ranking could become disruptive if players focus on it too much, McKeller said.

“Personally, I don’t like it very much because it can be a distraction,” he said. “We try to use it as a positive (motivator).”

The last time Calera was ranked No. 1 was on Sept. 8, 1982, when the Eagles held the number one spot for just a week, and finished the season at 10-3 that season.

“It’s a new one for me,” McKeller said. “(These are) unchartered waters for these kids. I know we’re moving in the right direction. The same thing that wins football games has always won football games.”

The main reason for the program’s resurgence has been the players on the team, McKeller said. He also said the team was focused on making themselves better, not on things it couldn’t control.

The Eagles will face Class 4A, Region 4 foe Dora this week, and if last season’s game is indication, the matchup could decide the winner of the region. Dora won, 39-21, last year and eventually clinched the region title.

Kickoff will be at 7 p.m. at Ricky M. Cairns Memorial Stadium on Sept. 6.

The Columbiana Snipers captured the 2013 Alabama NSA 14u Softball World Series Championship in Boaz on July 20. By DREW... read more