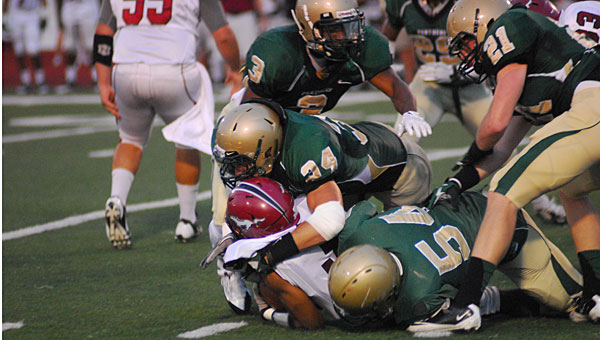 The Pelham Panthers took advantage of a few key defensive stands and turnovers to take down Stanhope Elmore 16-10 to start region play on Sept. 6 at Ned Bearden Stadium.

The Panthers finished the night with 276 total yards, 252 of which came on the ground. The Stanhope Elmore Mustangs racked up 205 total yards on the night.

Senior Christian Davis led the Panthers on defense, recording nine tackles and a forced fumble to help seal the victory for Pelham,

Tyler Brasfield returned for his first game of the season by recording 90 rushing yards on 15 carries and a touchdown.

“Our defense just gutted it out. The game could have gone either way, and our kids just kept on fighting,” said Pelham head coach Brett Burnett. “I’m proud of them. It was a great team win.”

Pelham jumped on the scoreboard about four minutes into the game when Seth Kelosky ran into the end zone from 3 yards out. Austin Bowen’s extra point attempt split the uprights to give Pelham a 7-0 lead.

On Pelham’s next possession, the Mustangs blocked a 28-yard Bowen field goal attempt, and then cut the Panthers’ lead to 7-3 on a 29-yard field goal midway through the second quarter.

With only a few seconds left in the first half, Bowen connected on a 27-yard field goal to widen Pelham’s lead to 10-3.

After holding the Mustangs on their first possession of the second half, Pelham lit up the scoreboard on a 6 yard touchdown run by Brasfield. Bowen’s PAT attempt was blocked.

On their ensuing possession, the Mustangs found the end zone on a 1-yard run, bringing the score to 16-10 in Pelham’s favor.

With about four minutes left in the game, Davis brought down a Mustang running back on fourth down, giving Pelham the ball at its own 37 yard line.

Pelham was unable to convert a first down, and punted the ball back to the Mustangs with 1:18 on the clock.

On the Mustangs first play of the ensuing drive, Davis forced a fumble, which was recovered by Pelham’s Braxton Hoyett to seal the victory for the Panthers.

By TREY HICKMAN/For the Reporter BESSEMER — Kingwood Christian received a rude reception from Bessemer Academy on Thursday night in a battle... read more