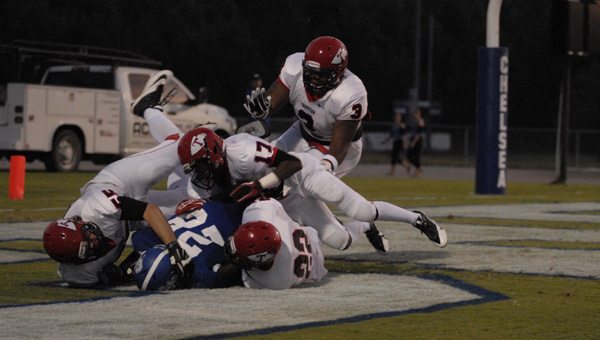 For the first time in nearly a decade, the Thompson Warriors football team has started a season 2-0.

The Warriors took advantage of two mistakes by the Chelsea Hornets to win their Sept. 5 matchup, 25-23, in Chelsea.

The game was a hard-fought contest that saw the Warriors get on the board first when Thompson’s defense stopped Chelsea’s Aki Coles in his own end zone for a safety after a David Buckalew punt pinned the Hornets inside their own 10.

Following the free kick, Thompson scored on a seven-play drive that saw Dee Tolbert take the ball in from 1-yard out. Following Buckelew’s extra point, the score was 9-0 in favor of THS.

After a Chelsea punt, the Warriors scored again on a 37-yard Buckelew field goal to extend their lead to 12 with 11:38 left in the second quarter.

On the next drive, Chelsea used just two plays to go 84 yards, scoring on a 79-yard touchdown run by Austin Washington. Taylor Martindale added the extra point to make it 12-7 with 11:14.

The Warriors tacked on another Buckelew field goal the next drive to make it 15-7.

Chelsea swung the momentum in its favor on the next drive, as Martindale blocked a Buckalew punt that was recovered in the end zone to pull within two with just under four minutes in the half following the missed conversion.

After a THS punt, Chelsea used a 10-play drive — that featured a touchdown run by Hagin called back —  to score a 38-yard Martindale field goal as time ran out in the half to take a 16-15 lead.

Chelsea opened the second half with an 11-play drive that ended on a 15-yard touchdown pass from Trent Hagin to Brock Campbell to take a 23-15 lead after Martindale’s extra point.

The Warriors responded with a 12-play drive that was capped off on a halfback pass from Tolbert to Christian Jetzel. Tolbert took the two-point conversion try in to tie the game at 23.

The turning point in the game came at the seven-minute mark. The Hornets were attempting to punt on their own 11-yard line, when a snap went over punter Austin Bailey’s head and out of the back of the end zone for a safety.

With a 25-23 lead and the free kick, the Warriors were forced to punt after a drive stalled out.

The Hornets took over the ball at their own 36 and put together a 12-play drive that ended when Hagin was picked off by Thompson’s Marcus Lewis on a 4th and 11 on the Thompson 23.

The Warriors then ran out the clock, clinching the victory.

“These kids deserved (the win),” said Thompson head coach Mike Montgomery. “The best is yet to come.”

Hagin finished 15-of-22 passing for 149 yards. Washington logged 112 yards on the ground with a touchdown. Austin Chadwick had 64 yards receiving.

Thompson stats were not available at press time due to an issue in with the statistician’s software.

Please check back with Shelbycountyreporter.com for updates.

Calera’s Ronnie Clark evades tacklers in a 2012 matchup with Chilton County High. The Eagles were named to the No.... read more