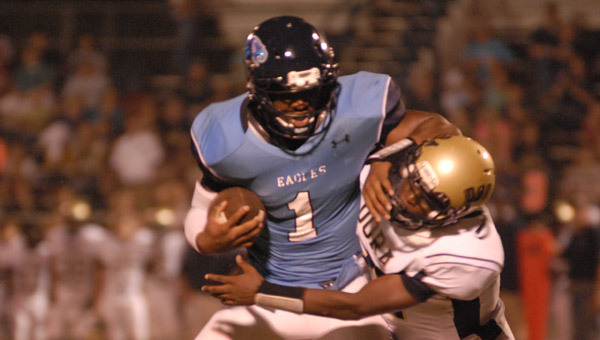 CALERA — In what was supposed to be a shootout between top-10 schools in AHSAA Class 4A ended up being a blowout as the No. 1 Calera Eagles routed the No. 8 Dora Bulldogs, 56-32, at home Sept. 6.

The game, which kicked off region play for both schools, saw Calera opened up with an eight-play drive that ended on a 2-yard touchdown run by Ronnie Clark. Stephen Ellison tacked on the extra point to make 7-0 in favor of the Eagles.

Dora’s next drive ended on a fumble that was recovered by the Eagles. Calera then went 59 yards in 11 plays to score again on a Clark touchdown run. Ellison was true with the point after, and Calera led, 14-0 with 2:03 left in the first.

Dora recovered a Ronnie Clark fumble on its own goal line, but gave the ball back on an interception by James Gayden. The Eagles turned the turnover into points as Clark hit Jordan Bishop for a 28-yard touchdown pass. Ellison added another point after, making it 21-0 with 4:20 to go in the first half.

The next play from scrimmage saw Tyler Harrell scoop up a Bulldog fumble, taking it 59 yards for a score. The PAT was good, and Calera led by 28 with 4:03 left in the half.

Calera got the ball back the very next drive, again on a fumble. Clark broke a 40-yard run on the fifth play of the drive to add another touchdown. With 1:57 left to go in the first half, Calera held a 35-point lead.

Dora was able to get on the board with a 33-yard touchdown run, but missed the extra point. The Bulldogs trailed at halftime, 35-6.

The second half began with a squibbed kick that fell into Calera possession. Another five-play drive ended on another Clark rushing touchdown. Ellison was true again, and the score was 42-6 with 10:06 to go in the third.

Shakeith Tyes provided the next touchdown, as he broke a 4-yard run on the next Calera drive. After the kick, the Eagles led 49-6.

Ty Evans scored the final Calera points of the evening, as he took a 2-yard run in to open up a 50-point lead with six seconds left in the third.

The Bulldogs were able to score 26 points in the fourth, but it proved to be too little too late, as Calera took a 56-32 win — and the No. 1 ranking — headed into week three.

“I give all the credit to the kids,” said head coach Wiley McKeller. “I couldn’t be prouder of our kids.”

The Eagles will square off with West Blocton on the road Sept. 13.

Vincent’s Quartez Walker tries to find an escape after being surrounded by Wellborn defenders during the game Sept. 6 in... read more