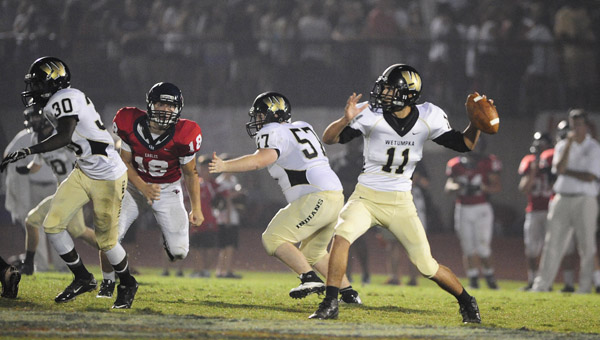 The Oak Mountain Eagles had no answer for Wetumpka’s rushing attack, as both teams played their first regional games of the season. The Indians took home the victory with the score of 28-6.

Wetumpka struck first with a three-play drive that resulted in a 41-yard touchdown run by Charlie Crenshaw.  The extra point was made as the Indians jumped out to a 7-0 lead with seven minutes left in the first quarter.

Oak Mountain didn’t wait long to add a score of their own. The Eagles pounded their way down the field on a 9-play drive, capped off by a 15-yard touchdown catch by Avery Nguyen. The 2-point conversion was unsuccessful, making the score 7-6 with 3:20 left in the first quarter.

The Indians immediately responded by returning the ensuing kickoff 99 yards for a touchdown. Crenshaw was responsible for the score giving him two touchdowns on the day. After the extra point Wetumpka extended their lead to 14-6.

Following the score by the Indians, Oak Mountain was able to put together a 10-play drive, but it ended with a turnover on downs inside Wetumpka’s 25-yard line.

As the half was coming to a close, the Indians picked off Oak Mountain quarterback Warren Shader. They were able to capitalize off the mistake with another touchdown run by Crenshaw, this time a 50-yarder. The score heading into halftime was 21-6.

Wetumpka’s Charlie Crenshaw was responsible for the only second half points on a 15-yard touchdown run, making the final score 28-6 in favor of the Indians.

After the game, Oak Mountain head coach Cris Bell was complimentary of the way the Indians played on both sides of the ball.

“I thought their kids came off the ball real well and played pretty good assignment football on defense,” he said. “They certainly took advantage of our miscues.”

The Eagles will travel to Stanhope Elmore on Sept. 13.

Reid Allen, left, rushes for a touchdown while Jonathan Arnold, right, blocks for him in the Eagles’ Sept. 6 win... read more