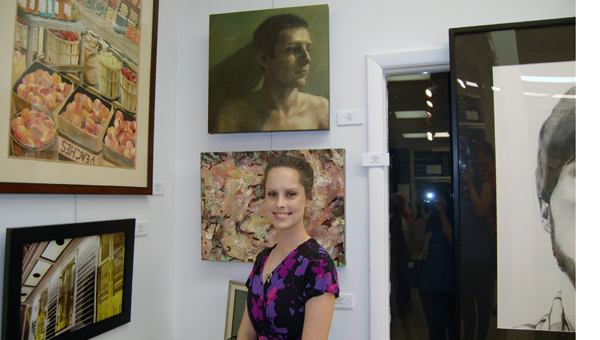 COLUMBIANA – Larisa Brechun is obsessed with shadows and how they play on human figures to create skin tones. Luckily for her, this obsession earned her a $500 cash prize last week.

Brechun, an artist based out of Hoover, won Best of Show at the Shelby County Arts Council’s Juried Art Show Sept. 5 for her oil painting “Shadows,” a portrait indicative of interest in shadows and the human figure. She has shown pieces at the annual show once before, but she has never won Best of Show, in Shelby County or anywhere else.

“It feels good,” she said. “I was very surprised.”

In addition to the cash prize, Brechun also won a solo exhibition at the Shelby County Arts Council this spring.

About 30 artists in all were selected for this year’s show, with about 65 pieces on display, said Susan Gordon, director of arts and education for the arts council. Categories include photography, oil painting, mixed media, sculpture, printmaking, drawing and watercolors.

“I feel like it gets better every year,” Gordon said. “There’s lots of variety … I think it’s the best show we’ve every had.”

Several photographs made it into this year’s show, including three by Pelham native Butch Oglesby, who owns Blue Moon Studios in Hoover’s Artists on the Bluff. Oglesby, a lover of history, said he “just loves cool stuff,” and two of his photographs showcase two local icons.

In “Siluria Jail,” Oglesby highlights the old jail in Alabaster, which he said is the only thing left standing of the old town before everything was torn down. “Rickwood Field,” another of Oglesby’s photographs, shows America’s oldest ballpark, which is based in Birmingham. Oglesby added digital overlays to both photographs.

“I love the feel,” he said. “It feels mysterious.”

Last year’s Best of Show winner Joanne Fogle had two pieces accepted into this year’s show, one in printmaking and the other in sculpture. Her print, “Webb,” a depiction of a spider web between trees, won honorable mention in printmaking.

The show will be on display through the end of October. For gallery hours and purchasing information, visit Shelbycountyartscouncil.com.

By NEAL WAGNER / City Editor The Alabama Department of Transportation will continue to close portions of U.S. 31 between... read more