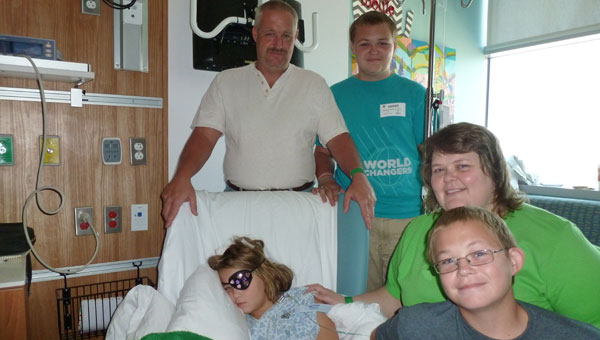 This close-knit Fourmile family was turned upside down when Mollie began to have debilitating headaches recently. After multiple visits to ER and doctors for two weeks, Mollie had a diagnostic MRI on Aug. 27.

“I was alone at Children’s Hospital South when I got a call on my cell from her pediatrician,” said Renee’. “I could not believe when she told me that a large tumor was found on Mollie’s brain stem. I was just numb with disbelief.”

By the time Renee’ got Mollie admitted to Children’s Hospital, her husband, sons, in-laws, pastor and two friends had arrived.

“The doctors told us that this was a serious malignant tumor and must be operated on immediately,” said Renee’. “If they could not get it all, Mollie would have radiation and chemotherapy.”

The next day the surgeon got most, but not all, of the tumor. Mollie is recovering at Children’s Hospital with balance and vision issues as she gets stronger to begin her chemo and radiation treatments.

The Columbiana community has risen to action with prayer, food, help and visits. Susan Conn began a Facebook prayer campaign and opened the Mollie Wilder Fund at M&F Bank. Prayers4Mollie, a Facebook page, has been opened to tell about her progress.

“My dream is still to be a gymnast at the University of Alabama,” said Mollie. “My coach taught me if you push hard, the worst comes first, and then the worst comes easier. I just got to push myself.”

By PHOEBE DONALD ROBINSON / Community Columnist A routine mammogram in 2011 was anything but routine for Cindy Nicholson of... read more