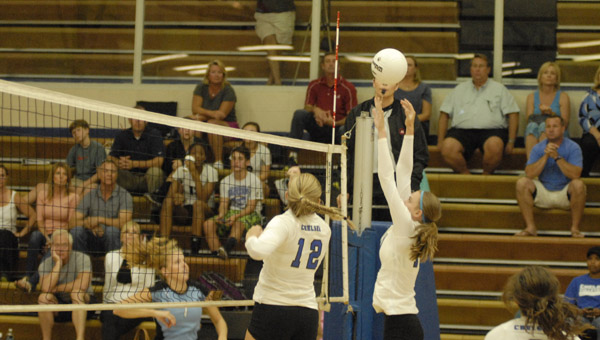 Chelsea’s Sarah Quick goes up for a block in a Sept. 10 matchup against Spain Park. (Reporter Photo/Drew Granthum)

The Chelsea Hornets took on the Spain Park Jaguars at home Sept. 10 in a battle of AHSAA Class 6A area unbeatens.

In what was a tightly contested match, the Jaguars came out on top, 3-1.

The second set saw the Jaguars score the first point, but Chelsea quickly came back, taking a 2-1 lead. The Hornets never looked back, taking down Spain Park 25-18.

The third set would not be as fortunate for the Hornets. Spain Park kept out to a 12-6 lead, and never trailed in the set, capturing a 25-14 win.

With their back against the wall, the Hornets came out fighting in the fourth set. The Hornets opened a 4-2 lead early, but the Jaguars came back to take a 5-4 advantage. The match was not with out controversy, however, as Spain Park gained a 24-23 lead on a ruling that Chelsea’s Destinee Benton touched the net on a close play. The home crowd felt the net was pushed into Benton, but the ruling stood, giving Spain Park the point.

Spain Park coach Paula Dill said despite the intensity of the match, she felt her team stuck to their game plan.

“We executed,” she said. “We knew they were a scrappy team. They’re very talented.”

Madison Turner had 11 kills, 10 digs and five assists for the Hornets. Benton finished with 13 kills, nine digs and an assist. Emma Cotney had 15 digs.

For the Jaguars, Jordan Nakayama had six kills and 11 assists, while Morgan Scott had 11 kills and nine digs.

FROM STAFF REPORTS MONTEVALLO – The University of Montevallo women’s cross country team begins the 2013 season ranked No. 7 in... read more