Have your theater and eat there, too 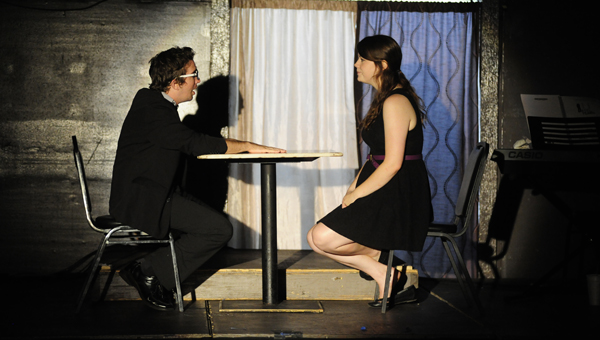 MONTEVALLO – University of Montevallo senior Brandon Caruthers has already begun thinking about what he wants to do after graduation, and he’s already getting the ball rolling.

“I’m actually starting up a production company that’s going to put on plays in small venues and also do independent films,” Caruthers said.

His first project is bringing what he calls the “lost art” of dinner theater to the Birmingham area, beginning at the Main Street Tavern in Montevallo with a production of “The Last Five Years” Sept. 12-14.

The difference, according to UM senior Mary Kate McLaurine, who plays Cathy in “The Last Five Years,” is that audience members should feel “more involved since they’re just kind-of sitting around having a meal and also happen to be watching the show.”

“I think it makes the atmosphere a little more casual,” McLaurine said.

Speaking of casual, that’s how the whole production started.

“(While at El Agave), we were joking around about things we could do,” said show director Jenna McCown, also a senior at UM. “When we actually started talking about it and getting serious with it, we realized it was possible.”

The small group of students gained the production rights and starting gathering make-shift props, costumes and sets weeks later, working rehearsal times around everyone’s work, class and other production schedules, as many of the students were involved in other productions at the same time.

The students’ various reasons for wanting to perform “The Last Five Years,” however, are anything but casual.

McCown in particular has a very personal connection to play.

“I had a friend who loved the show, and she always talked about how she wanted to see it done,” McCown said. “And then she passed before she ever really could. It became a thing in the back of my brain that I always wanted to do.”

McLaurine said she appreciates the play for its honesty in portraying the marriage and divorce of its composer, Jason Robert Brown.

“He doesn’t sugarcoat anything in the relationship,” McLaurine said. “It could very easily be a story about the bad guy who cheats on his wife, and poor her, but it’s actually a story about two good people who have flaws and try to work it out, and it just doesn’t happen.

“I think it’s just a really honest and true look at a modern relationship,” McLaurine said.

All performances will begin at 7:30 p.m., with dinner served before the show and tickets costing $20. For purchasing information, call Korey Wilson at 256-658-5224 or email Montevallochamber@gmail.com.