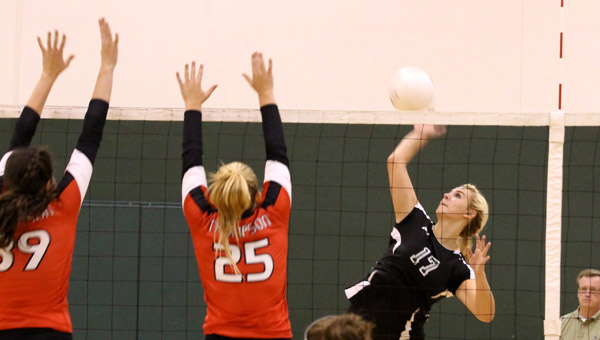 After recent tournament struggles that had the Pelham Panthers volleyball squad at 2-14 on the season, the quad returned to its home gym to take on rival Thompson on Sept. 12, winning 3-1.

The volleyball version of the Battle of U.S. 31 opened up with Pelham getting a 2-0 lead in the first set. Thompson came roaring back, scoring six unanswered to take a 6-2 lead. The two squads tied at 8-8 and battled back and forth, with Pelham eventually taking a 15-14 lead. The Panthers never trailed again in the set, taking it 25-18.

In set three, Pelham again jumped out to a small lead, this time 3-0. Thompson used a strong serve game to take a 4-3 lead. The Warriors led the majority of the set, but Pelham was able to slowly claw back into the lead. The Panthers took a 22-21 lead, riding the serve game of Sarah Sudd to take a 25-21 win.

The fourth set featured the Panthers scoring early and often. Pelham opened with a 5-0 run, working its way to a 13-6 lead. The Panthers led by as many as 10, heading into game point with 24-14 lead. Thompson was able to go on a 6-0 run to close within four, but it wash’t enough as the Panthers took the set 25-20, and match, 3-1.

“We knew Thompson was a fantastic team,” he said. “We knew it’d be tough. We’ve been in kind of a slump, and we needed a win. We got it versus a very good team tonight.”

Autumn Hiett led the Panthers with 11 kills and 16 digs, while Hayley Brisendine had 23 kills and Sudd had four aces for Pelham.

Thompson statistics were unavailable at press time. Please check back with Shelbycountyreporter.com for updates.

The Panthers will take on Spain Park on the road Sept. 17. Thompson will travel to Wetumpka to take on the Indians Sept. 17.

FROM STAFF REPORTS University of Montevallo junior Ashlee Beck was named the Peach Belt Conference Golfer of the Week in women’s... read more