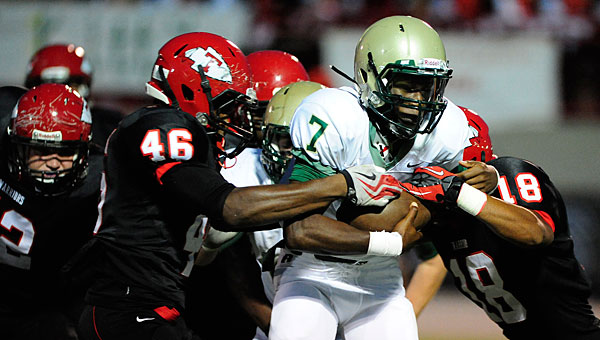 Pelham’s Devon Mines gets swarmed by a gang of tacklers from Thompson during Friday’s game in Alabaster. (Reporter Photo/Jon Goering)

The Thompson Warriors used a strong defensive showing and a breakout performance by running back Dee Tolbert to take down the Pelham Panthers 31-16 for the first time since 2007.

“It’s really priceless. We are just going to ride this thing and see where it takes us,” Thompson head coach Mike Montgomery said after the win. “The community has always been there.”

“Defensively, we hung for a while. Offensively, we just got our butts handed to us,” said Pelham head coach Brett Burnett. “They were just the more physical team tonight. It looked like they were a little bit hungrier than we were.”

Thompson finished the night with 355 total yards of offense, compared to Pelham’s 252. Tolbert was responsible for 202 of Thompson’s yards.

“Dee did what he was supposed to do,” Montgomery said of Tolbert. “He knew what he had to do and he did it.”

Thompson lit up the scoreboard to start the second quarter after a pair of Pelham face mask penalties set up a 1-yard Tolbert touchdown run. Buckalew’s PAT split the uprights to give Thompson a 7-0 lead, which the Warriors held through halftime.

The Warriors extended their lead with a pair of third-quarter scores. The first came on a 3-yard Tolbert touchdown run and Buckalew PAT, and the second came when Buckalew split the uprights from 25 yards out to give the Warriors a 17-0 lead late in the third quarter.

After Pelham turned the ball over on downs, Thompson found the end zone to start the fourth quarter on a 1-yard Tolbert touchdown run. Buckalew’s PAT was good, giving Thompson a 24-0 lead.

Pelham’s first points of the game came when Robert Hayes ran into the end zone from 4 yards out for a touchdown. Pelham’s Moregan Sharp found the end zone for the two-point conversion, bringing the game to 24-8.

Thompson answered with a 3-yard Tolbert touchdown run and successful Buckalew PAT to put the Warriors ahead 31-8 with a little more than two minutes left in the game.

On its ensuing drive, Pelham scored the final points of the night when Tyler Brasfield shot into the end zone from 1 yard out. Jalen Smith then found the end zone for the two-point conversion.