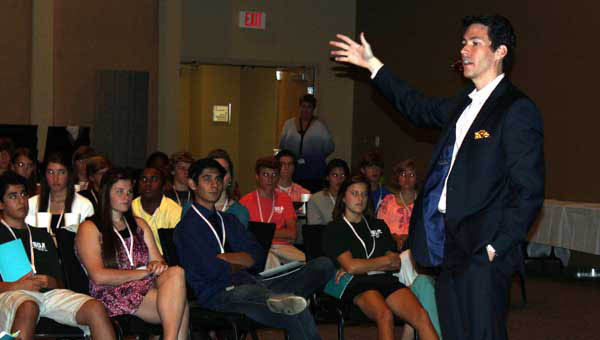 Impressed by the program, they brainstormed ways to have more students attend during their car ride home.

The program featured several speakers and small group sessions, led by 10 college students from Auburn University, Samford University and the University of Alabama. Kevin Scott, co-founder of the ADDO Institute, an organization that promotes leadership development and cultural travel, was the keynote speaker. Scott shared examples of young people making a difference in their communities.

“Success today is you guys going out and doing things to make your communities better,” he said.

John Milton, OMHS SGA sponsor and AP economics teacher, said SGA members raised about $4,500 to host the conference and community partners donated an additional $5,500. The program’s purpose was to help develop the students’ “soft skills,” such as communicating, planning and organizing.

“I want them to have a great experience today. This is the start of the conversation about leadership,” he said. “We can start the conversation for them about what kind of legacy they want to leave.”

OMHS students have already planned a county-wide community service day for the spring. Cato is serving as the coordinator of “We Give Back,” which is based on an Auburn University service program.

“It’s as easy as one, two, three. It’s one day. (You) recruit two people for three hours,” she said.

Groups of students and adult chaperones will volunteer at job sites throughout Shelby County and the Birmingham metro area, including nursing homes, elementary schools, churches and hospitals.

Meadow View Elementary School has benefited from its influx of federal funding over the past few years. (Reporter Photo/Neal Wagner)... read more