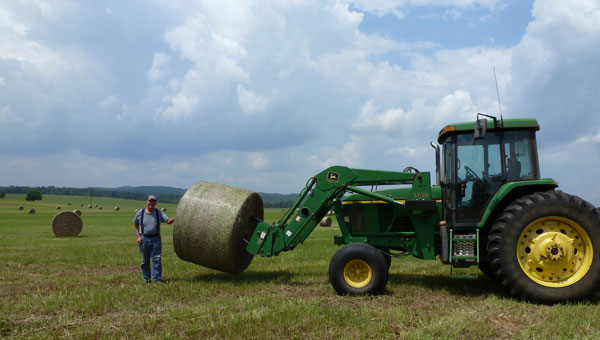 Cattleman Paul Starnes stands next to hay he bailed on land on Shelby County 28 in the Kingdom. (contributed)

Driving from Columbiana toward Lay Lake on Shelby County 28 is the pastoral, rural area called the Kingdom.

Paul Starnes lives and raises cattle in the Kingdom as his father Charlie did before him.

Starnes’ home sits on the land where he grew up, different house but same place. Starnes, a member of the Shelby County Cattleman’s Association, works from dark to dark raising beef cattle exclusively on 170 acres of land he owns and leases. He also bails hay, selling about a quarter and using three quarters of the hay to feed his cattle.

“Today’s cattleman knows more about genetics than my father’s generation,” said Starnes. “I raise an Angus/Brahman cross called Brangus. They are hearty beef cattle. I operate a cow/calf operation. Calving is in the spring from January to March.”

The Brangus breed was developed to combine the superior traits of two different cattle: Angus, known for good carcass quality with fertile females, and Brahman, known for its disease resistance, overall hardiness, and outstanding maternal instincts. Registered Red or Black Brangus must be 5/8 Angus and 3/8 Brahman and polled (no horns).

“I have a book that has all the information about my cattle,” said Starnes. “I write down the tag number, sex and parentage. I sell my cattle at auction in Montgomery.”

Starnes lost his wife Linda of 36 years in 2001. Five years ago, he married wife Elizabeth and they have five grandchildren. However, Starnes is the last generation in his family to be a Shelby County cattleman. Son Ted is a marine biologist working on the Bering Sea and son Travis is a master mechanic with Mercedes in Hoover. Daughter Teresa lives in Concord with her family.

“Raising cattle is in my blood,” said Starnes. “I just can’t leave them alone. I love to watch them grow and calf. I enjoy selling them and getting a good price. It is a business. It is a blessing to be able to work outside and see the deer, turkeys and geese. It is a pleasure to just be outside and see it all.”

Mollie surrounded by her family at Children’s Hospital after surgery to remove a malignant tumor on her brain stem: Father... read more