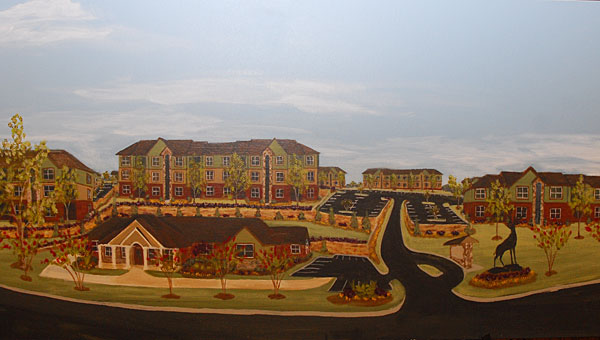 The Pelham City Council put off voting on a rezoning request for a proposed 228-unit apartment complex off Huntley Parkway during its Sept. 16 meeting to allow the developer more time to address the project’s impact on traffic.

The council originally was set to vote on a rezoning request for a currently vacant piece of land off Huntley Parkway to allow the proposed apartment development to move forward.

Developer C&A Enterprises is looking to build the 228-unit Grand Reserve apartment complex next to the Publix shopping center, and also is planning to construct a retail development across the street from the apartment complex.

The City Council did approve the rezoning request for the retail development during its Sept. 16 meeting.

“We are not trying to rush this through. We want to do it right,” Charlie Beavers, the developers’ attorney, said during the council’s Sept. 16 work session. “They want to show you they are a good corporate citizen up front even before they are one.”

The council’s decision to table the rezoning request for the apartment complex came a week after council members held a public hearing on the development. During the public hearing, several Pelham residents said they were concerned the new apartment complex would worsen traffic on Huntley Parkway during morning and evening rush hours.

During the public hearing, Darrell Skipper, who conducted a traffic study of the area, attributed most of the traffic congestion on the road to incorrectly timed traffic signals on Shelby County 52 and only having one right-hand turn lane from Shelby County 52 to Interstate 65.

Aubrey Long, with C&A Enterprises, told the council the company has submitted two proposals to the Shelby County Highway Department and the Alabama Department of Transportation aimed at relieving congestion between Huntley Parkway and Interstate 65.

The second proposal would add a second right-hand turn lane from Shelby County 52 westbound onto I-65.

“Whichever one looks like it might be a possibility, we will bring it back to you,” Beavers said. “We want to bring you real solutions that are doable.”

Long said the city’s traffic light maintenance contractor last week added more green light time to the traffic signals at the Shelby County 52-Huntley Parkway intersection, and said it has helped to cut down on some of the rush hour congestion in the area.