By MICHELLE ADAMS/FOR THE REPORTER

Montevallo High School has a new app available to download from Google Play for an Android phone. The young innovator behind this app is junior Wezley Sherman, who is an experienced programmer even thought he is still in high school.

Sherman was approached by MHS media specialist Anita Glover about creating an app for the school, and he immediately began working on it. The MHS app includes a school calendar, important phone numbers and links to the Montevallo city website and the school’s online newspaper. Also included is a bell schedule, which allows the user to see which class period he or she is in and how many minutes are left until the next class.

Sherman plans to make further additions to the app, such as school lunch menu. 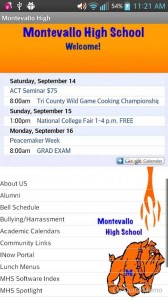 Sherman is also part of what he calls a “team” known as Mostwanted Game Development, responsible for the gaming app Solar Forge. For just under a dollar, Solar Forge allows players to create planets and solar systems, and permit planets to go to war with one another. So far, Sherman and his partners have made over $2,000 on Solar Forge, for which Sherman, as the team’s accountant, is required to file tax forms.

“Our game received a boost from a free review,” Sherman said. “Luckily, the reviewer had a lot of positive things to say, and the criticisms allowed us to make improvements to the game.”

Mostwanted’s next venture is a 2D side-scroller car game called Battlelines that Sherman hopes to have completed by the end of 2013.

To achieve such success, Sherman has dedicated himself to much study.

“I started programming three years ago, when certain games became boring to me,” Sherman said. “I had a general interest in computers and wanted to learn how games were made, so I had to read and study.”

Sherman learned the programming languages Java, JavaScript and C#, and worked two years toward completion of his first gaming app to have something worthy of being sold.

This remarkable MHS student has future plans for, of course, seeking a degree in computer science and working in game development.

Michelle Adams is an English teacher and the newspaper sponsor at Montevallo High School.