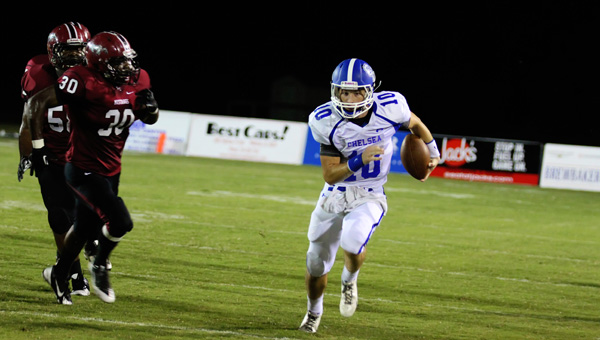 By JIM PLOTT/Special to the Reporter

MILLBROOK — Despite a strong fight, the Chelsea Hornets fell short against the Stanhope-Elmore Mustangs, 48-26 Sept 20.

The first half of play was a see-saw affair.

The Mustangs struck first as Smith scampered 89 yards for a 7-0 Stanhope lead with 9:26 remaining in the first stanza.

The Hornets tied things 7-all with 4:36 to go in the period on a 3-yard run by Austin Washington.

After the ensuing kick, Stanhope Elmore responded with another score on a 67-yard run by Powers. The Mustangs went back on top 14-7 with 4:58 left in the opening quarter.

The Mustangs got on the scoreboard again early in the second. Smith was hit at the line but broke through for a 32-yard ramble with 11:12 remaining to give the home team a 21-14 advantage.

The Hornets responded minutes later with a touchdown pass. Trent Hagin connected with Taylor Martindale on a 27-yard toss. The PAT sailed wide, leaving Chelsea trailing 21-20 with 8:17 to go in the quarter.

Stanhope quarterback Jaryus Wilson accounted for the next Mustang score, running the ball in from the six for a 28-20 lead with 5:33 left.

The Hornets marched back downfield and Anthony Jones took it across the goal on a 7-yard carry with 1:55 to go until intermission.

The Mustangs went to the locker room holding a slim 28-26 lead.

Neither team was able to score in the third period, but Stanhope posted three more touchdowns in the fourth to pull away, 48-26.

Chelsea will take on Tarrant at home Sept. 27.

By CLAYTON HURDLE/For the Reporter           They won it for Joseph Honea. Honea, a senior trombone... read more