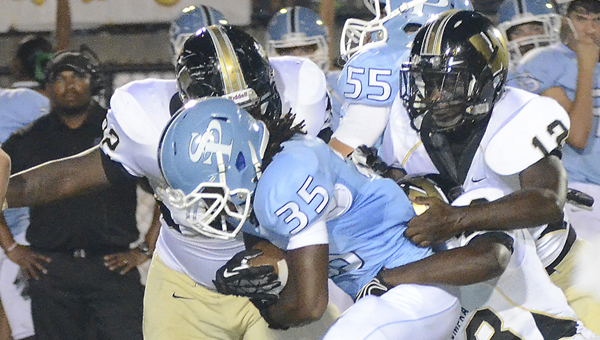 Spain Park’s DeAndre Thompkins tries to break free of a tackle in a Sept. 10 matchup with Wetumpka. (Wetumpka Herald/Kevin Taylor)

By DREW DENNIS/For the Reporter

Spain Park managed to hold off a fourth quarter push and defeated Wetumpka 24-13 Sept. 13.  Spain Park had control of the game from start to finish and improves their record to 4-0 on the season.

Spain Park didn’t waste any time getting on the scoreboard scoring on their first drive of the game.  The drive stalled at the goal line on a personal foul by the Jaguars but they managed to put points on the board with Thomas Taylor’s 21-yard field goal.

Spain Park received excellent field position with 36 seconds left in the first quarter after Anthony Smiley blocked Wetumpka’s punt setting the Jags up on the Indian’s 15-yard line.  Wade Streeter took the first play from scrimmage 15 yards for the touchdown giving Spain Park a 10-0 lead going into the second quarter.

After a three and out by Spain Park, Oranthus Jackson returned the Jags’ punt 50 yards setting up the Indians with great field position on Spain Park’s 20-yard line.  Montivenus Cross took it in from four yards out and after a blocked PAT the score was 10-6 Spain Park with 7:41 left in the second quarter.

Spain Park answered back with a 3:27 drive that went 52 yards capped off by Otis Harris Jr.’s one yard touchdown run giving Spain Park back the momentum and making the score 17-6 Spain Park and that’s how it stayed going into the half.

Spain Park came out of the half with killer intent putting together a nine play drive ending in Otis Harris Jr.’s two yard touchdown run with 8:48 left in the third quarter.  Thomas Taylor III’s PAT was good giving the Jaguars a commanding lead at 24-6.

Wetumpka showed their grit by scoring on a 2-yard touchdown run by Oranthus Jackson which capped off an eleven play drive by the Indians when it was absolutely necessary.

Wetumpka got the ball back with 10:57 left in the fourth and put together a 17-play drive but were unable to find the end zone and stalled out at Spain Park’s 30-yard line with 3:26 left in the game.  Wetumpka’s defense managed to make another stop to get the ball back but an interception by Mason Duke closed the game and gave Spain Park the 24-13 win.

Head coach Shawn Raney said he was proud of the way his team played.

“We still have to get a lot better, but I think we got better (from) last week,” he said.

Calera registers shut out on Corner

By TREY HICKMAN/For the Reporter CALERA ­— For the second consecutive week, AHSAA Class 4A No. 1 Calera took a... read more