Harvest of Hope raises more than $100,000 for Oak Mountain Missions 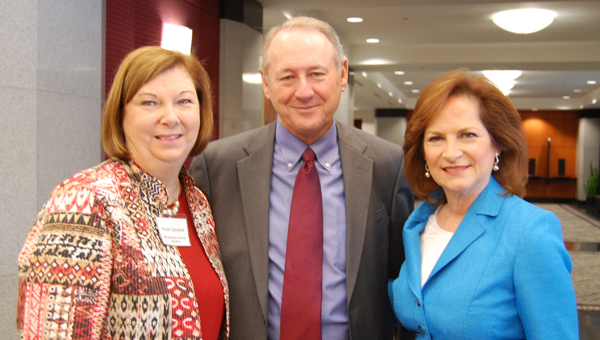 “Shelby County is touted as the wealthiest county in Alabama and all of the things that are right,” Curry said at the Harvest of Hope fundraiser luncheon at the Cahaba Grand Conference Center Sept. 17.

“If you do the job that I do, and if you ride the roads that the men and women of the sheriff’s office do, you’ll find out there is just as much poverty in Shelby County as any other county, and you’ll be amazed at the depth of it. You’ll be amazed.”

Critical to serving the impoverished in Shelby County is Oak Mountain Missions, which helps re-instill hope and offers not handouts, but a hand up, Curry said.

“Although it appears that Oak Mountain (Missions’) goal is to minister to a person’s physical needs, in reality, their goal is to serve the most important need of all, and that’s the condition of their soul,” Curry said. “If you fix the soul, you fix it all … The whole goal is to give not a handout but a hand up, and that means so much to people who are struggling to find that hope.”

At the annual fundraiser, where Curry was the guest speaker, more than $100,000 was raised for Oak Mountain Missions in the form of silent auction bids and other donations. As of Sept. 23, Oak Mountain Missions volunteer Kay Moore said $102,000 had been raised but more donations were expected to follow. Last year, the gross total raised from the event was $114,000, Moore said.

SafeHouse of Shelby County volunteer coordinator Valencia Albright also spoke at the event, to “take you a little closer to where the rubber meets the road” regarding the impact of Oak Mountain Missions, according to Fox 6 news anchor and emcee Janet Hall.

Albright said SafeHouse of Shelby County – a domestic violence and sexual assault center serving Shelby, Clay and Coosa counties as well as the entire city of Hoover – has been around since 1989 and was one of the first organizations to receive help from Oak Mountain Missions. She called Oak Mountain Missions a “safe haven” for the clients served by SafeHouse.

“She said, ‘Now I feel like I can go out and be presentable. I look like somebody.’ Just from having some hot rollers from Oak Mountain Missions,” Albright said.

Curry said he admired Oak Mountain Missions ability to do so much with so little resources in a “by the community, by the citizen, by the volunteer” effort.

“I can’t vote for that senator in Idaho, and I can’t vote for that congressman in Texas,” Curry said. “So I made a decision to start at the bottom, not at the top. Work locally. Work right here at home. Do everything we can do to fix here, our home, and let’s let that spread upward.”

For more information or to donate, visit Oakmtnmissions.com.