By LAUREN HEARTSILL DOWDLE / For the Reporter

Castille, a former University of Alabama, Tampa Bay Buccaneers and Denver Broncos defensive back, shared his story with the students and encouraged them to overcome personal struggles and follow their dreams.

“I want to help motivate them so they can be the best they can be,” said Castille, who has been the University of Alabama’s football team chaplain for the past 12 years. 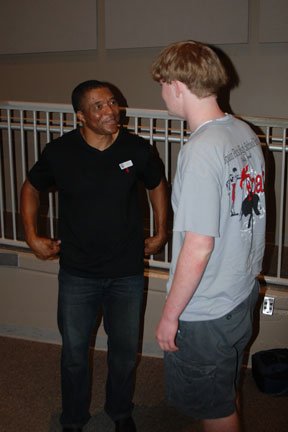 Ryan Rauch, a freshman trombone player, talks with Jeremiah Castille after listening to his motivational words. (Photo by Lauren Heartsill Dowdle / For the Reporter)

“My circumstances say I should be an angry black man,” Castille said. “If you’ve got adversity: good. It will make you stronger.”

He said he made a decision to change his life’s outcome. He started on this journey by becoming the first of his siblings to graduate from high school.

“Motivation has to come from within,” he said.

Another one of his stepping-stones to reaching his goal came in the form of a letter when he was accepted to the University of Alabama.

“When I got that letter, I was fired up. Why? Because that was my dream,” he said, with his three-decade-old excitement still apparent.

Castille encouraged students to follow their dreams and stay true to their morals. “All champions have character,” Castille said, “and I decided to be a champion.”

He left the nearly 130 band students with some words to live by.

“Young people, your life is too special — don’t waste it,” he said. “There are no do-overs. This thing called life is bigger than you. The world is waiting on you to make your mark.”

And the students took note. Josh Gothard, a junior who plays the baritone, says having a former NFL player coming to talk with them was a big deal.

“Everything he said was really enlightening,” Gothard said. “We can use a lot of what he said when we are out on the field. He’s a great influence.”

FROM STAFF REPORTS The Vincent Yellow Jackets travelled to Ranburne to take on the Bulldogs Sept. 20. Unfortunately, the trip... read more