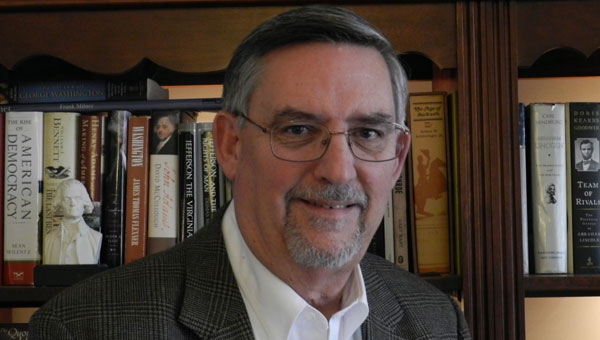 The word Alabama means “clearers of the thicket” in the Choctaw language. The era from European colonization to the Civil War is when Alabama emerged from a raw frontier to a fully functioning state. This period rich in history is the focus of Clearing the Thickets, a History of Antebellum Alabama written by Shelby County resident Herbert James “Jim” Lewis.

Lewis’ love of Alabama history began in childhood traveling with his family to historical places as Horseshoe Bend and Moundville. His roots go deep back to the early 1820s when his ancestors first arrived in Alabama. His maternal great-great-grandfather William Phineas Browne operated the first systematic underground coal mine in Montevallo. Columbiana resident Great-Great Uncle A. A. Sterrett was probate judge in 1833-1834 and served in the Alabama legislature. His maternal great grandfather William Bradford Browne was a Columbiana attorney and mayor.

Lewis graduated from the University of Alabama Law School and was a Judge Advocate in the U.S. Air Force. In November 1978, he joined the U.S. Department of Justice, where he was an assistant district attorney and retired in 2009. Lewis currently serves of the board of the Shelby County Historical Society and has written for the Encyclopedia of Alabama and the Alabama Review.

“Along the journey that culminated in me writing Clearing the Thickets, I learned to be appreciative of the diversity of peoples who toiled to carve a frontier settlement out of the wilderness that was to become Alabama,” said Lewis.

Cindy Kelly Furhmeister, chief of the Civil Division of the U.S. Attorney, worked for many years with Lewis.

“I am so excited that Jim’s work on early Alabama history has been published,” said Furhmeister. “Clearing the Thickets is a true labor of love, and Jim provides us with the fascinating account of Alabama’s rise from territory to statehood and beyond. As Jim’s professional college and friend for more than 25 years, I have witnessed his dedication to this project, and I know that anyone interested in early Alabama history will greatly enjoy this book.”

The book is available for purchased at Amazon.com and Barnesandnoble.com.

Cattleman Paul Starnes stands next to hay he bailed on land on Shelby County 28 in the Kingdom. (contributed) By... read more