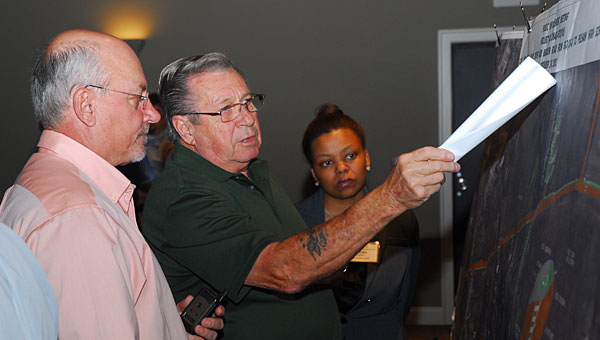 From left, James Brown, Kenneth Foss and Tameka Hughes look over a map of a proposed sidewalk project along Bearden Road during a Sept. 24 ALDOT public meeting. (Reporter Photo/Neal Wagner)

The Alabama Department of Transportation could begin acquiring property for a sidewalk along Bearden Road near Pelham High School as early as December, according to city, state and county officials.

ALDOT held a public involvement meeting at Pelham’s Riverpoint Baptist church on Sept. 24 to field questions and distribute information about the sidewalk project. As proposed, the sidewalk would begin on Panther Circle near the entrance to PHS, and would stretch about 1.5 miles along Bearden Road to U.S. 31.

The about $1 million project is being funded by an 80/20 federal grant, requiring an about $200,000 match from the city, said Pelham Mayor Gary Waters. The Shelby County Highway Department is managing the project for Pelham.

Waters credited his predecessor, former mayor Don Murphy, and the former City Council members with securing the federal grant to fund the project.

Waters said the “ball got rolling” on the sidewalk project after then-14-year-old PHS student Tyler Lee was struck by a vehicle and seriously injured when he was walking along Bearden Road following a PHS sporting event in August 2011.

“Kids don’t walk to school like they used to, so it took an accident like this to get this project off the ground,” Waters said, noting Lee eventually made a full recovery. “As unfortunate as it was, this is a happy ending.

“If we can safeguard the life of one child, this will be worth it,” Waters said.

Waters said ALDOT is ready to begin the property acquisition phase of the project in the next few months, and likely will have the sidewalks completed by April 2015.

As of Sept. 13, there were 136 registered sex offenders living within the county. (Illustration by Amy Baldis) By STEPHANIE... read more