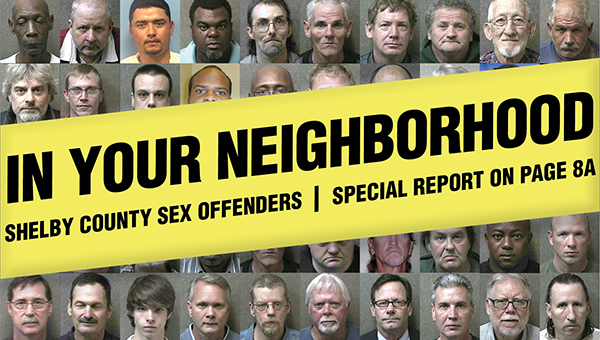 As of Sept. 13, there were 136 registered sex offenders living within the county. (Illustration by Amy Baldis)

There are currently 194 sex offenders living in the county, including 136 who are required to register for public notification.

“The numbers are down a little bit due to several different factors,” Bedsole said. Those factors include several offenders who have moved out of the county and many juvenile offenders who are “rolling off” the list because of 10-year required notifications. The only juveniles subject to lifetime notifications are those who were older than 14 when they committed first degree rape, first degree sodomy, first degree sexual abuse, sexual torture and related, high-threat offenses as outlined in Section 15-20A-28 of the Code of Alabama.

Whether a sex offender must register for public notification depends on the nature of the offense, said investigator Jason Myrick, one of two sheriff’s office employees responsible for managing sex offender compliance.

“There are different groups of offenders,” Myrick said. “There are juveniles and adults, and then (within those categories) there are sexually violent, high-threat and low-threat offenses.”

For instance, misdemeanor convictions such as sexual misconduct and indecent exposure require offenders to register with the sheriff’s office but do not require public notification, Myrick said. Public notification also depends on the conviction date, which determines the set of laws that applies to the offender, Myrick said. As new laws have gone into effect, some offenders have been grandfathered in according to the laws under which they were convicted.

“Juvenile youth offenders are not subject to notification except for those considered to be sexually violent predators,” he said.

Both Bedsole and Myrick said monitoring sex offenders within the county is a big responsibility. Myrick shares the responsibility with fellow investigator Nathan Kendrick, who both monitor sex offenders in addition to managing their regular case loads with the criminal investigations division.

The clerks in the sheriff’s office also play a key role, according to Bedsole, by processing 30,000 documents a year plus documents related to sex offender registration.

When reporting to the sheriff’s office to re-register, the offender’s name is run through national criminal databases to search for warrants, and the offender is required to complete an updated registration form, verify that all information is correct, have a new photograph taken and pay a $10 fee.

The process also involves updating all internal databases and tracking software, presenting the sex offender with a copy of the laws (regardless of whether the laws have changed or not), checking his or her driver’s license for the proper sex offender stamp, asking the offender if he or she has new accounts on social media sites and sending a copy of the paperwork to the city where the sex offender lives.

“It is a tremendous responsibility for us,” Bedsole said. “Our ultimate goal is to manage our sex offenders as effectively as we can, and we do a really good job with the personnel that we have.”

For more information about sex offender registration, visit Alisondb.legislature.state.al.us/acas, click the Code of Alabama tab, view, Title 15 and Code 20A.

The Chelsea Business Alliance will have its first meeting Oct. 9 at 11:30 a.m. at Chelsea City Hall. (Contributed)  ... read more