Pelham improves to 4-1 with win 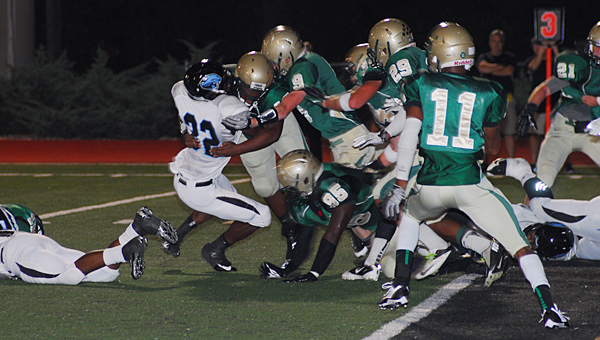 Pelham’s defense makes a goal line stand against the visiting Northridge Jaguars during the Panthers’ 49-40 win over the Jaguars on Sept. 27 at Ned Bearden Stadium. (Reporter Photo/Neal Wagner)

Pelham outlasted the visiting Northridge Jaguars 49-40 on Sept. 27 to improve to 4-1 on the season.

The Panthers recorded 482 total yards of offense, but gave up 421 to the Jaguars.

Running back Moregan Sharp had a breakout night, racking up 231 yards on 15 carries, followed by quarterback Devon Mines with 94 yards on 19 carries.

Defensive leaders for the Panthers were Blake Dunaway with nine tackles, Josh Brasher with eight tackles and D.J. Ervin with six.

After a Northridge touchdown to start the game, Pelham answered on an 18-yard Sharp touchdown run and Austin Bowen PAT.

Northridge added two more touchdowns in the first quarter, and Mines connected with Jalen Smith on a 42-yard touchdown strike.

After Northridge pulled ahead with a touchdown to start the second quarter, Pelham answered with a 1-yard touchdown run by Tyler Brasfield. Bowen’s PAT split the uprights.

The third quarter saw the teams trade scores, as the Jaguars added a touchdown followed by PHS touchdowns on a 64-yard run by Sharp and a 1-yard scamper by Devon Mines.

The Panthers pulled ahead for good early in the fourth quarter, as Sharp added another touchdown on an 11-yard run. Bowen’s PAT brought the game to 42-33 in Pelham’s favor.

After Northridge added its final score of the night, bringing the game to 42-40, Pelham quickly answered on a 55-yard touchdown run by Sharp with a little more than eight minutes left in the game. Bowen’s PAT brought the game to 49-40.

Pelham’s Richard Cummings recovered a Jaguar fumble on the ensuing kickoff, but Pelham was forced to punt the ball away on its next possession.

Northridge threatened to score with a little more than two minutes left, but turned the ball over on downs.