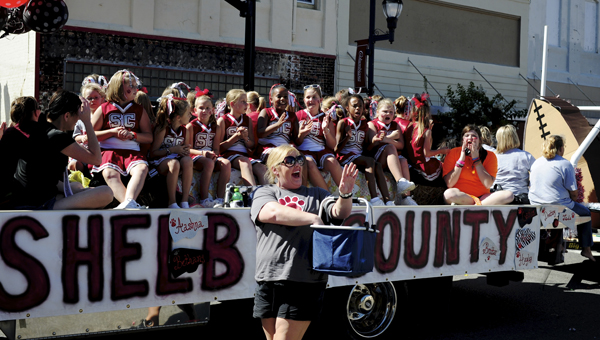 COLUMBIANA – While Shelby County High School’s annual homecoming parade has seen some changes over the years, one thing hasn’t changed, and that is the spirit of the students who participate in it.

In the past, students created large floats to showcase in the parade, though over time the focus has transitioned from making floats to dressing up “in character,” said homecoming coordinator and Shelby County High School teacher Twyla Fryer.

This year’s theme, “It’s Time for a Culture Shock,” has seniors dressing up as Greeks, juniors as Egyptians, sophomores as medieval dukes and duchesses and freshman as Native Americans.

“We’ve redone the banners a little bit this year, and the kids are excited about that,” Fryer said. “In the past, we made it more of like a miniature float, and it was just hard to see. (This year, the banner is) going to be longer and the kids will be carrying it. It will be part of how they’re dressed up and part of their character.”

The parade will kick off at 1:45 p.m. Oct. 4, with teachers of the year Soli Walker and Jim Adams serving as the grand marshals of the parade.

The SCHS band, cheerleaders and homecoming court will also participate in the parade as well as representatives from Columbiana Middle School, Shelby Elementary, Wilsonville Elementary and Elvin Hill Elementary.

Community members and organizations wishing to participate in the parade should contact Twyla Fryer at Tfryer@shelbyed.k12.al.us or call the high school office at 682-6600.

SCHS plays Ramsey at home at 7 p.m. Oct. 4 with the homecoming court presentation beginning 30 minutes before the game.

Montevallo’s McKenna Anderson goes up for a block in a Sept. 26 matchup with Indian Springs. (Contributed/Amy Pintaro) By DREW... read more