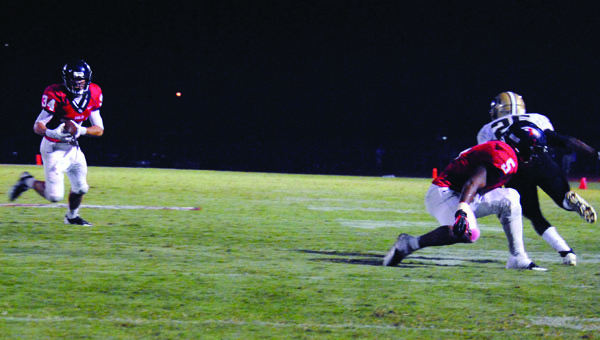 By CLAYTON HURDLE/For the Reporter

Though Oak Mountain relied heavily on the legs of Harold and Warren Shader, the Eagles called on the experience of Josh Gaines to score the game-winning touchdown Friday night against Pell City.

Gaines, the junior and second-year starter, scored from three yards out to give the Eagles a 20-15 lead; a two-point throw from Warren Shader to sophomore Reid Golson made the score 22-15.

As the game-winner was scored with four and a half minutes left, it was up to the Oak Mountain defense to secure the win.

With the help of a roaring homecoming crowd, Oak Mountain held off a Panther fourth-down conversion attempt with under two minutes remaining to clinch the Eagles’ first home win of 2013.

“We got our wits back in the second half and those guys really rose to the occasion,” Oak Mountain head coach Cris Bell said. “I’m really proud of the way our guys played on defense. That’s a heck of a football team we just beat, and I’m ecstatic.”

The Gaines touchdown and defensive stop capped a second-half comeback for Oak Mountain, who trailed 15-7 at the intermission.

After each team scored on its opening drive, neither scored again until Pell City senior running back Demaurian Wills reached pay dirt with three minutes left in the half.

The Eagles began their comeback with a seven-minute drive to open the third quarter, capped by a Harold Shader one-yard run that brought the score to within a point.

Oak Mountain’s game-winning drive nearly stalled at the Pell City 20, but a third-down pass from Warren Shader to his older brother Harold not only kept the drive alive, but also set up Gaines’ winning run.

The Eagles, who improved to 2-3 with the win, hope the non-region win will propel them into their final four games in Class 6A, Region 4. Currently 1-2 in the region, Oak Mountain will begin the second half of its season with a trip to Chelsea.

“We’re both needing wins regionally, so it’s going to be a heck of a matchup,” Bell said. “Hopefully all of Shelby County will be out there.”