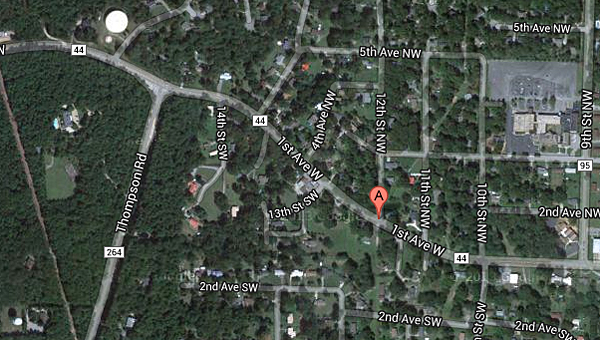 A Sept. 20 police chase in Alabaster came to an end in the 1200 block of First Avenue West. (Contributed)

A teenager was charged in Shelby County Juvenile Court with driving under the influence of alcohol and attempting to elude a police officer after police said he led them on a chase during a Thompson High School football game.

According to Alabaster Police Chief Curtis Rigney, the underage male allegedly was intoxicated before the THS-Prattville football game on Sept. 20 when the suspect left the stadium in his vehicle.

The suspect allegedly ran multiple vehicles off the road, smashed into multiple mailboxes and fled officers when they attempted to pull him over, Rigney said.

The pursuit came to an end at about 7 p.m. when the suspect collided head-on with an Alabaster police cruiser in the 1200 block of First Avenue West. The collision resulted in about $10,000 worth of damage to the police cruiser, according to police incident reports.

The officer in the cruiser suffered minor injuries in the collision, and the suspect was transported to the hospital for treatment for minor injuries before he was arrested and charged with the crimes.

Because the suspect is a juvenile, his name was not released.

“We are lucky it didn’t turn out worse than it did,” Rigney said.

Dear Editor, I sent the below letter to the mayor of Chelsea and would like to see it published: Dear... read more