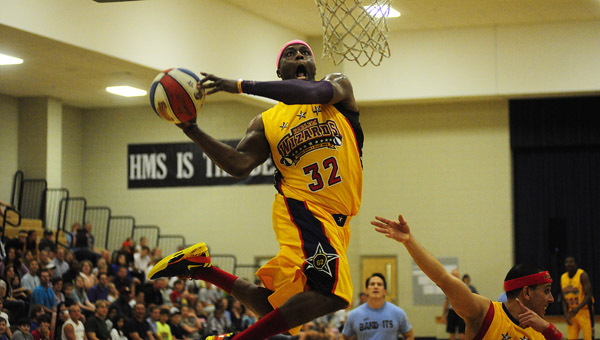 The Harlem Wizards entertain the crowd at HMS on Oct. 1. (Reporter Photo/Jon Goering)

HELENA — The Sept. 27 matchup between the Harlem Wizards and the Helena Band-Its saw the home team fall, 81-75, but it’s safe to say not a soul went home unhappy.

The game was a scheduled match between the barnstorming Wizards and the Band-its, put on by the Helena High School Band Boosters to help raise funds for the brand new school’s marching band.

The game itself was a mixture of high-flying action, slapstick comedy and dance party as fans were treated to the explosiveness of the Wizards’ dunking, ball-handling and shooting skills while watching the Band-Its seemingly lack thereof.

While the Band-Its struggled to put points on the board, the Wizards, led by showman Simpson, put on a performance, complete with basketballs on strings, buckets full of confetti and some free throw “lessons” by Simpson and the other Wizards to members of the Band-its.

The Wizards raced out to a 35-20 lead by halftime, which invited children in attendance to take the court and shoot souvenir basketballs that were available for purchase at a merchandise trailer, as well as a game where Simpson passed around the basketball in a variety of ways, eliminating those who dropped it until there was one person left.

The third quarter saw the Band-its post its strongest quarter, as former Mississippi State Bulldog and current Pelham High administrative assistant Branden Vincent helped lead the way for the Band-Its with some slam dunks of his own, as Simpson spent the quarter dancing with fans in the stands. As the quarter progressed, more Wizards took to the stands and buckets began to count 10 points apiece. By the end of the third, the Band-Its were playing 5-on-1 and led, 69-55.

In the fourth quarter, all five Wizards returned and went on a rally, outscoring the Band-Its 26-6 to take a 81-75 win.

While the visiting Wizards took home the victory on the court, both the band boosters and the Wizards agreed the real winner was the community.

“I’m so excited,” Jan Hull, one of the organizers of the event said. “It was a fun event, something that we’ve never had in this town before. It was fun for all ages.”

“Our main objective is all bout community,” he said. “That’s what the Wizards are all about. We love to bring the community together, with a great family show (and environment. On top of all that fun, we help to raise money. To help them do that, it’s a win-win. It’s been unbelievable. I hope (they) invite us back again.”