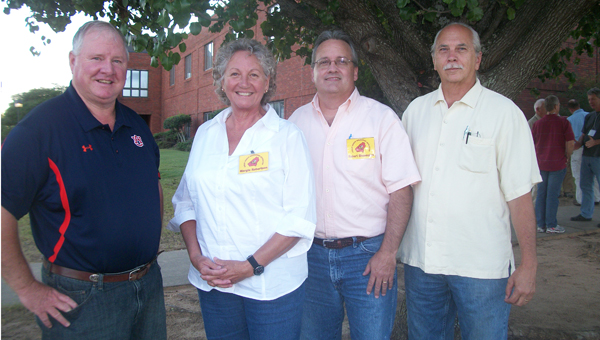 Four Shelby County residents were recently named Master Beekeepers after they completed the more than two-year-long certification program, which gives them extra credentials for when they teach classes for fellow and beginning beekeepers.

George Baldwin of Sterrett, Loyd Mehaffey of Chelsea, Robert Shoemaker of Wilsonville and Margie Robertson of Vincent were part of the first group of Alabama residents named Master Beekeepers at the Alabama Beekeepers Association’s annual meeting Sept. 27. There are only three other Master Beekeepers in the state.

As part of the program, the beekeepers are required to score a certain percentage on written exams as well as register their hives with the Alabama Department of Agriculture, complete beekeeping-related service hours, attend honeybee programs and practice beekeeping for at least two years.

Both Baldwin and Shoemaker said they started beekeeping about six years ago to pollinate their respective gardens, and each has grown from having just a few hives to having more than 20.

“Once I started keeping them, it was just an enjoyable hobby,” said Shoemaker, who also works at EBSCO Industries, where he’s been for the last 18 years. “It’s sort of like gardening when you plant something and watch it grow. With beekeeping, it’s the same way when you raise your own queen and you establish your own hive.”

Mehaffey said he enjoys beekeeping because it’s a constant learning process and, with his new certification, he is able to “more authentically get out there and work with other beekeepers.”

“I’m a big fan of backyard beekeeping,” Mehaffey said. “I really believe our state bee populations can be saved by the people who keep two to 10 hives.”

And the number of “backyard beekeepers” is growing. Mehaffey said four years ago, there were 130 members of the state beekeeping organization. Now, there are more than 600 members.

“What (the Master Beekeeper) program is going to allow me to do is capitalize on that interest, reach out to that population and provide them with the education and information they’re going to need to be successful.”

Robertson said she also sees education as being important.

“We depend on so much honey in the United States,” Robertson said. “We depend on it for preservatives and additives and everything, including medicine … It’s the hobbyist that’s going to keep this thing going.”

The Shelby County Beekeepers Association holds classes for beginning beekeepers starting in January, though Robertson said spots fill up fast. The group also holds monthly meetings at the Chelsea Senior Center on the first Thursday of every month. For more information, visit Shelbybees.org.