MONTEVALLO – In a battle of the minds, University of Montevallo professors closed out UM’s annual Founders’ Day celebration with a sort-of dueling of disciplines, making arguments in front of hundreds of UM students as to why their disciplines should be brought on a fictional life raft and survive all other disciplines in the event of a catastrophe.

The Life Raft Debate, in its 16th year, is sponsored annually by UM’s Philosophy Club. According to the website, participants are to “imagine that there has been a nuclear war, and the survivors (the audience) are setting sail to rebuild society from the ground up.” Only one seat is left, and the professors must argue for their respective disciplines while audience members listen and cast their votes at the very end.

Starting off the debate was reigning champion Brett Noerager, representing biology. He asked the audience to consider what cataclysmic event brought the audience to sail away in the first place.

“Unbelievable. If we had just denied it long enough, but no, science just had to have its way,” he said.

“It wasn’t because of a lack of our ability to crunch numbers,” Parker said. “What I offer is not truths or facts. I offer to be a participant, to participate with you … to (create) a greater, newer social order.”

Scott Varagona, the eventual winner representing mathematics, started his argument by saying he already knew what audience members were thinking.

And mathematicians are made to start from scratch, he said. Mathematics is also needed to design cities, build buildings, construct bridges that won’t collapse and manage economies, he said.

“Embrace mathematics and save the world,” he said.

“Don’t save me,” he said. “The desire to save oneself is what got us into this mess.”

West said he hoped the audience would remember his words, and the fact that he was willing to give up his life for someone else. In creating a new world, he said, “Think about the mistakes that are destroying this one … This is a fun activity, but there is some truth in it, don’t you think?”

Pearce Durst argued that his discipline, rhetoric, was a “vote for us as a whole” because it was necessary to sustain a democracy. During his rebuttal, Durst also noted his discipline’s role in the actual debate.

“The game here is persuasion,” Durst said. “What makes this night possible? We are all using it.”

Before votes were cast, former Life Raft Debate winner and physics professor Kevin Hope appeared on stage to play “Devil’s Advocate” and encourage audience members to vote everyone off the raft. And while Hope lost the argument in the end, he didn’t miss the opportunity to take a jab at those on stage.

About West giving up his life to save the other disciplines, Hope said, “I would pick on Richmond, but I think he’s already done enough for himself.” 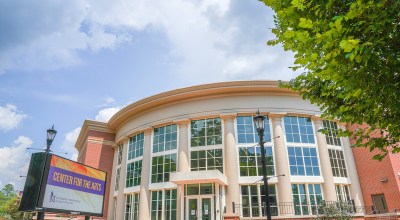