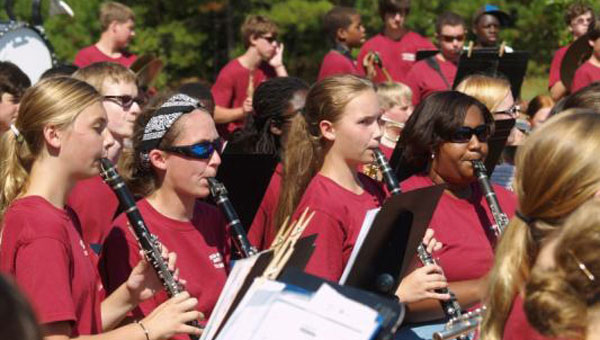 With money from fundraisers, they purchase band instruments, equipment and other related items, she said. Last year’s purchases included seven new tubas at $7,000 to $8,000 each, a new keyboard, and percussion equipment, including a mirimba.

However, this year’s purchases of musical equipment may be more limited than last years, because income from Chelsea Day, which was held Oct. 5, was not as large as the previous year, although there were more vendors involved. “And the band is really needing new uniforms, which will be $160,000,” she added.

There are 157 band members, Scarlet said, and around 157 families involved in Band Booster. Parents automatically become members of Band Booster when their children become band members. Some parents, like Scarlet and her husband, Tommy, have more than one child in the band. Their daughter, Leigh, a senior, plays clarinet, while 15-year-old Adam plays baritone.

This year band students, with help from a couple of moms, gathered around 75 donated items from businesses, organizations and individuals for a silent auction at Chelsea Day. The students put together several large tables full of beautifully decorated gift baskets, along with several items outside the baskets, including a grilling outfit and a Family Night-out certificate.

Scarlet said she has been trying to think of ways to help finance new uniforms, and is considering cooperate sponsors.

“I don’t know how many businesses we have that are large enough they might become sponsors,” she said, but added that there are possibly individuals who would also be able to become sponsors.

People interested in becoming sponsors for the band, or who might help in some other way with this project, can contact Scarlet Walker at 529-3750 or Tawa2410@bellsouth.net.