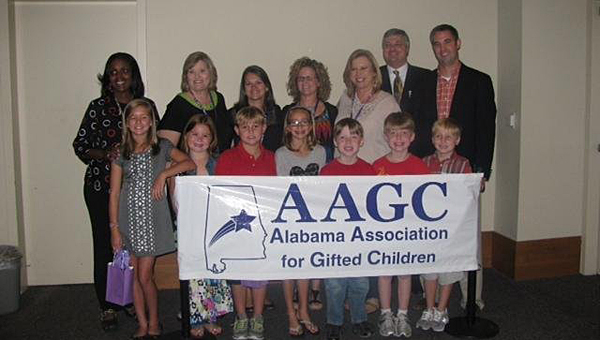 The association named McDonald the overall individual winner for fifth-grade students in the state, and named the CVES third-graders the overall winner in the group category for grades third-fifth. The seven Alabaster students were honored during the association’s state conference on Sept. 27 in Birmingham. TIS gifted education teachers Susan Mitchell, Nicole Naro and Rita Sparks and CVES gifted teacher Melissa Foster also were honored during the conference.

In her video, McDonald, a gifted student at TIS, explained what it’s like to be in the school’s gifted education program.

“Sometimes I feel like my thinking is just out there. But in gifted class, I get to think how I want, and that makes me feel like I belong,” McDonald said in the video. “I care about helping people. In gifted class, we work on service projects to help others.”

McDonald praised the TIS gifted education program for allowing her to talk out solutions to her classwork with her peers and for being allowed to ask her teachers ample questions.

In their video, the six CVES students presented a news broadcast by the “Gifted News Network” outlining why gifted education is important to Alabama, the nation and the world.

Gifted education programs such as the one at CVES help train future leaders in communities across the globe, the students said.

“They all represented our schools so well,” said TIS Principal Dr. Ke Jones. “We are so proud of them.”

Buster the Bus rolls back into Shelby County schools