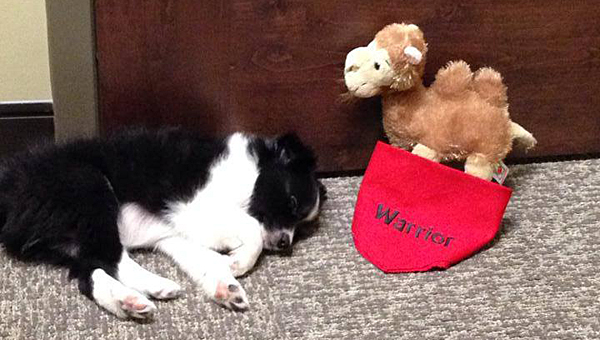 In addition to spending time visiting Alabaster City Schools leaders and spending time with the city’s students, ACS’s youngest employee has also been busy updating his own Facebook page.

“He’s been busy posting updates about school events and pictures of what he’s been doing every day,” ACS Student Services Coordinator Dorann Tanner said on Oct. 23. “He’s been keeping it up-to-date.”

The Alabaster Board of Education voted to hire Warrior – an Australian shepherd puppy – during its Oct. 16 meeting. Through a partnership between ACS and the Birmingham-based Hand in Paw organization, Warrior will take part in programs ranging from special-education reading sessions to anti-bullying campaigns.

Warrior will serve as a full-time ACS employee, and is being cared for by the district’s at-risk and alternative school teacher, Wendy McNish. Alabaster’s Petsmart is providing Warrior’s obedience classes and a local veterinarian is providing the dog’s health care.

“They told him he was free to go home after he took the test, but he wanted to go back to school to spend more time with Warrior,” Tanner said. “All the kids love him.”

Though Warrior has spent most of the past week in the alternative school and ACS central office, he soon will make visits to all Alabaster schools, Tanner said.

“We put a picture up today of Warrior with a camel for hump day,” Tanner said. “He has been getting a lot of messages from the kids, and they have all been very sweet.”