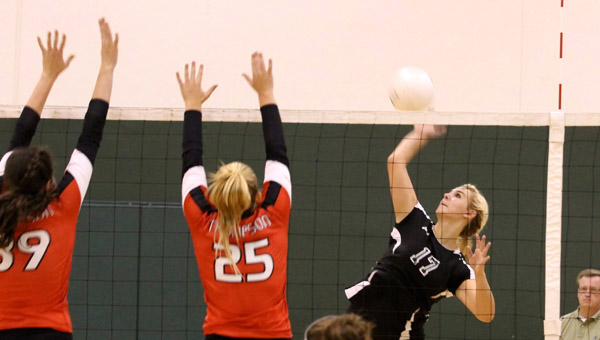 Several Shelby County volleyball squads have secured a place in the AHSAA super regional tournaments held in Montgomery (for Areas 1-8) and Huntsville (Areas 9-16) Oct. 25-26 by winning or finishing runner-up in their respective area tournaments. They are:

The Yellow Jackets were able to punch their ticket to Huntsville by finishing runner-up to Altamont in the finals of the Area 10 tournament in Class 2A. Vincent was able to push Altamont to three sets, ultimately falling 2-1. The first set saw Vincent grab a 25-16 win, but the Jackets could not hold on, as Altamont took the last two sets 25-6 each. Vincent will take on Sand Rock in the opener of the super regionals.

The Indian Springs School grabbed a spot in the Montgomery super regional by taking the Class 3A Area 8 tournament championship over Leeds. ISS took the first set, 25-23, but fell in the next set, 25-27. Indian Springs rebounded to take a 25-20 win in the third set, following up with a 25-20 in the fourth set to close out the finals. ISS will take on Dale County in the next round.

The Calera Eagles captured the Class 4A Area 7 championship with a sweep of Bibb County in the finals. The Eagles never allowed the Choctaws to break double digits, winning each set 25-9, 25-7 and 25-6, respectively. Keyanna Gayden had 13 kills and two aces, Akia Harris had eight kills, a block and 10 digs, Grace Rodriguez had five kills and three aces and Faith Graham had two kills and eight aces. Calera’s opponent in the next round has yet to be determined. Check back with ShelbyCountyReporter.com for updates.

The Lions make their way to Huntsville following a runner-up finish to John Carroll in the Class 5A Area 9 tournament. The Lions disposed of Ramsay in the first round, but came up short against the Cavaliers, 3-0. Lauren Palmer had 10 kills, Rachel Nix had eight kills, Christie Robertson and Molly McKenzie both had nine assists in the runner-up effort. The Lions’ opponent in the next round has yet to be determined. Check back with ShelbyCountyReporter.com for updates.

Chelsea’s berth in the super regionals came courtesy of a runner up to Pelham in the finals of the Class 6A Area 8 tournament. The Panthers defeated Oak Mountain in the first round, 3-1 to face Chelsea. To make it to the finals, the Hornets beat Spain Park. In the championship round, the Panthers took the Hornets in four sets, finishing 25-11, 18-21, 25-14 and 25-15 in each set. Autumn Hiett finished the match with 10 kills and 11 digs, Lauren Bass had three aces and Emily Jackson had 42 assists for Pelham. For the Hornets, Madison Turner finished the tournament with 15 kills, nine assists and 22 digs, Chelsea Tyson had 10 kills and 19 digs and Courtney Campbell broke the 1,000 career-assist mark with 22 on the evening. Neither team’s opponent in the next round has been determined. Check back with ShelbyCountyReporter.com for updates.

The Warriors will make it to Montgomery after capturing the Class 6A Area 7 championship by dismissing Prattville in three sets. The Warriors dominated the match, taking the Lions down 25-7, 25-9 and 25-16, respectively. Tara Miller had 37 assists and five blocks, Kelsea Bivins had 25 kills and seven blocks and August Newberry had four aces and eight digs. Thompson’s opponent in the next round has yet to be determined. Check back with ShelbyCountyReporter.com for updates.

Yellow Jackets use second half push to pound Indians