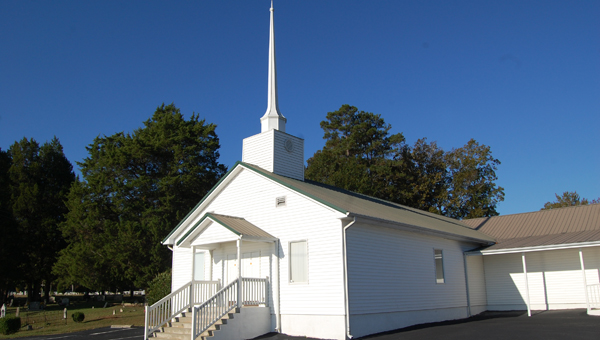 SHELBY – Bethlehem Baptist Church has seen many changes in its 175 years in Shelby, an anniversary the church celebrated with a dinner and program Oct. 6.

When the church was built in 1838, Lay Lake didn’t exist. Now, the church sits on a point and is surrounded by water on three sides.

In 1912, it burned to the ground after being struck by lightning. In the 1920s, a new church was built in the same location after church members raised funds through box suppers and ice cream socials.

In 2000, the church continued building. Members, like Gene Howell, spent almost 16 months expanding the sanctuary and building a space for a new fellowship hall, Sunday school classes and offices. Howell had retired from his job the year before, and he said helping to expand the church was like working a full-time job.

Howell, who has been a member of Bethlehem Baptist for nearly 30 years, said the church has about 240 members with about 50 attending every Sunday. When Howell moved from Bessemer to Shelby with his wife, Cleta, in 1986, he said he was attracted to the church’s small size.

“Our church has a good feel to it,” Howell said. “I like smaller churches. This is more like a family.”

Despite its size, the church takes advantage of its location in the heart of the Shelby community. On Easter Sundays, the church hosts a sunrise service and feeds breakfast to about 80 members of the community. They sing on the front steps of the church as they watch the sun rise over the lake.

“That’s quite a sight,” Howell said.

The church also holds an annual food drive and sends about 1,200 pounds of food to the Ministry Center in Columbiana. The children of the church also collect an offering to raise money for the Alabama Baptist Children’s Home, and they’re frequently recognized as giving the most money per capita in the state.

“He was 5 or 6 years old when he accepted Jesus, and I baptized him,” Howell said. “It’s been good that we raised him here.”

Bethlehem Baptist has services on Sundays and Wednesdays. Sunday school starts at 10 a.m., with services at 11 a.m. and 6 p.m. on Sundays, and prayer services are held Wednesdays at 7 p.m. For more information, visit Bethlehembc.net.