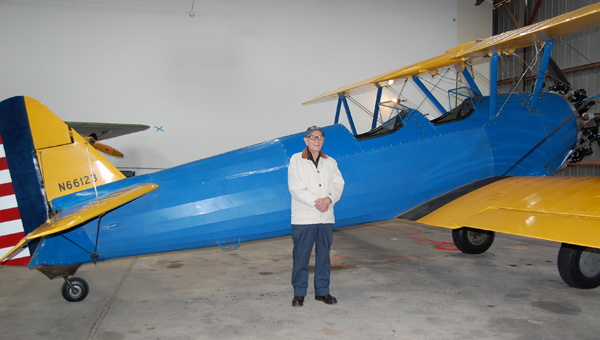 ALABASTER – Seeing a P-51 Mustang, B-17 Flying Fortress and B-24 Liberator fly into the Shelby County Airport brought back a lot of memories for retired Lt. Col. Ellis Cruse. A pilot who served during World War II and the Korean War, Cruse hasn’t flown a plane since returning from his last tour in Korea in 1953.

Cruse, now 92, dreamed of flying ever since he was a little kid. He awaited the day when he could become a cadet, and unlike most cadets, Cruse got to fly all the planes.

“Every time they worked on an airplane where he was stationed, he was the guy that had to (fly it to) make sure that the repair was done correctly,” said Jim Harley with the Collings Foundation, the group responsible for bringing the planes to Shelby County. “He flew them all.”

Although Cruse flew planes mainly for administrative purposes and test flying during World War II, he flew planes in combat in Korea. In both wars, Cruse said the thrill of flying helped mitigate the downsides.

“I hated living in New Guinea,” said Cruise of his station during World War II. “It’s an awful place to live. But getting to fly these airplanes kind of offset that. For a few years there, I had more adventure than most people will have in 10 lifetimes. It’s a rare privilege in many respects.”

As an example, Cruse talks about a time when he was flying back to his station. He saw what he thought to be storm clouds gathering on the horizon.

“A volcano right off of New Guinea had erupted and it was just filling the air with smoke,” Cruse said. “I was flying over it, so I got to look down into an active volcano.”

The biggest thrill, however, was the flying itself, Cruse said.

“It never lost its magic to me,” he said. “When you run down the runway, when you feel you’re moving and all of sudden, boom, you’re flying. It’s magic!”

Harley said the Collings Foundation travels to small towns and airports throughout the country every year to pay tribute to veterans and to educate the public about World War II history through the aircrafts. The foundation visits, on average, 110 cities in 38 states in 11 months, Harley said.