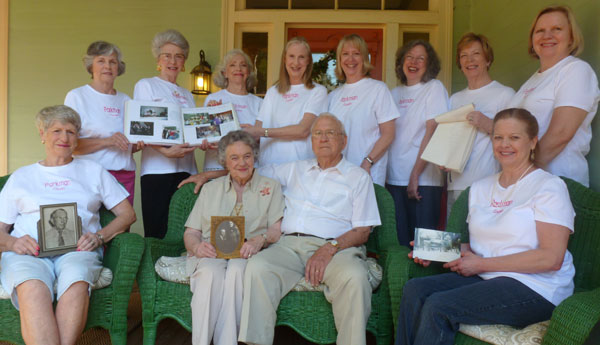 For 12 years, the Parkman female first cousins have traveled the Southeast for their annual reunion to bless the ties that bind.

The 10 cousins are children of the eight siblings of Joseph and Mary Alice Parkman, who married in 1910 and settled in Seale in Russell County, Ala. They are: Frances Soukup of Deatsville; Melanie Howard of Seale; Alice Overton of Harrogate, Tenn.; Ann Parkman of Atlanta, Ga.; Ethel Fern of Alpharetta, Ga.; Jean Lufkin Bouler of Birmingham; Judy Land West of Huntsville; and Apphia Woods, Diane Hett and Marian Fletcher, all of Columbus, Ga.

“We don’t allow outsiders – no mates, no sisters-in-laws are allowed,” Fern said. “These reunions are for the privileged few.”

Several years ago Ethel, the “travel agent”, was looking for bed and breakfasts within 60 miles of Birmingham large enough for 10 guests with local attractions. A Google search brought up the Columbiana Inn, recently voted Best Bed and Breakfast in Shelby County by the Shelby County Reporter. Columbiana Inn is owned by Andrew and Diane Moore, who restored the 1889 Victorian home into a bed and breakfast with six bedrooms each with private bath.

Cousins who arrived on Friday afternoon went to Davis Drug for its world-famous milk shakes and toured Main Street. After dinner at Bernie’s on Main Street, the cousins settled in at the inn. Saturday morning, the last surviving Parkman sibling, Helen Parkman Land and her husband, James, of Hoover, came for breakfast cooked by Diane. The cousins reminisced with Aunt Helen and Uncle James over family scrapbooks and heirlooms.

They also toured the George Washington Museum Saturday afternoon and ate a potluck dinner followed by Dirty Santa at the inn on Saturday night. They returned to their homes Sunday after breakfast.

The cousins pray the Parkman family blessing in unison before each meal written by Marion’s father, Claude C. Parkman, former county commission of Russell County. The blessing symbolizes the heartfelt love that the Parkman’s share for each other.

“For family, for friends, for fellowship, for food and fertile fields, and for a fulfilling faith, we thank thee, our Father, Amen.”

Quilt for Valor volunteers Sheila Gallups, Sarah Atchison and Agnes Poole holding valor quilts they made that will be presented... read more