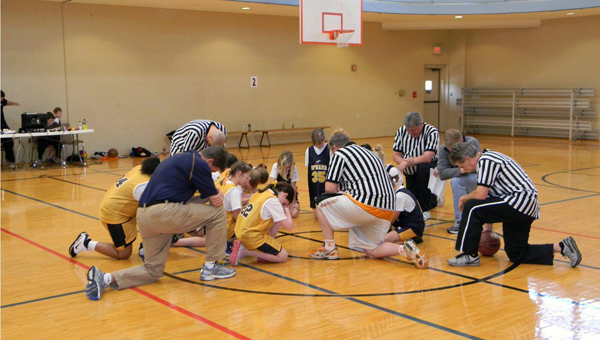 Sports do not always have to be cutthroat. That is the philosophy behind Upward Sports, the world’s largest Christian sports league that partners with more than 2,500 churches worldwide. Sign ups are currently underway for Upward basketball and cheerleading at churches throughout the county.

According to the Upward website, the goal of Upward Sports leagues is to develop players physically, emotionally, socially and spiritually through playing sports. Many famili

es, like the Copes family, find this to be the case and decide to participate in Upward for years.

Aubrey Copes, a sixth grader at Thompson Sixth Grade Center, began playing Upward basketball at First Baptist Church of Alabaster seven years ago. He hopes to see his team go undefeated this year in honor of his last year playing, as Upward ends at sixth grade.

“We welcome kids of all skill levels, just like we welcome parental involvement no matter what their level,” said Brent, who coached for the first time last year despite being relatively unfamiliar with basketball. “At this age, it’s all about learning new skills and having fun. It’s not necessarily about being the star on the court but about working together as a team.”

The importance of teamwork is especially emphasized during halftime, when teams hold Bible studies or devotions.

Like Brent, Mark Windham also has a son playing Upward basketball and has served as a coach for the league at Calera Baptist Church, where he is a member. Windham said the league helps develop confidence and skills in kids without requiring too much of a time commitment. Practices are held for one hour every week, and games are played on Saturdays in January and February.

“I like the sportsmanship aspect of it where it’s not about how bad you can beat somebody,” Windham said. “The Bible verses are the important part of it. Basketball is the second part of it.”

Lorie White, the coordinator of the Upward program at Calera Baptist Church, said over half the players at her church are not church members, and no players ride the bench the entire time.

“For me, I feel like it’s something that God called me to do,” White said. “It’s a lot of work, but we see a big influence in it with the community. We have kids come back every year and play until they’re too old to play.

“Our main priority is to teach the children about Jesus and His love and what it means to be a follower of Christ and showing that love to other people. Our second priority is teaching the kids the basketball rules. For the younger groups, we don’t even keep score for their games because during the game, we want the focus to be on learning the basic skills, not just who has the most points on the board.”

Most deadlines for Upward basketball throughout the county are at the beginning of November, with practices starting in November or December and most games starting in January. To sign up or for more information about an Upward Sports league near you, visit Upward.org.