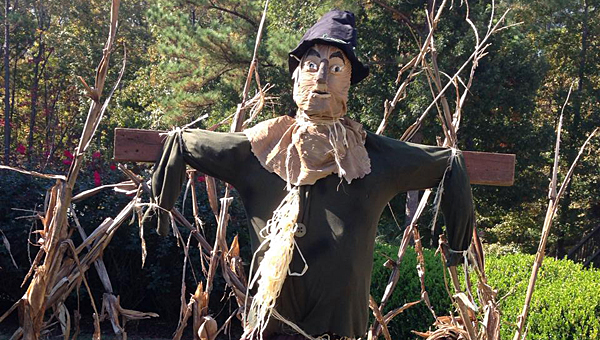 Alabaster resident Brady Talbert makes most of his Halloween decorations from scratch each year. (Contributed)

Before the final trick-or-treater had visited 14-year-old Brady Talbert’s house on Kensington Lane in Alabaster last year, he already knew his Halloween decoration theme for this year.

“I don’t know how he does it, honestly,” Talbert’s mother, Brooke, said with a laugh. “As soon as Halloween is over one year, he is already planning for the next year.” 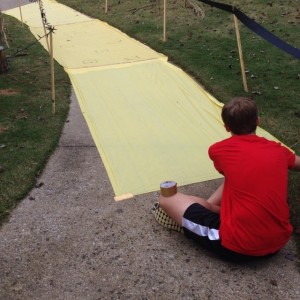 Talbert puts the final touches on the yellow brick road on Oct. 30. (Contributed)

For the past several years, Talbert has created extravagant Halloween displays at the family’s house at 205 Kensington Lane. In 2011, he transformed the house into a pirate ship, and created a mad scientist theme in his front yard and garage in 2012.

While several houses in Shelby County go all-out for Halloween, Talbert takes a much different approach than most Halloween revelers. Instead of relying on store-bought decorations, Talbert mixes his decorating talent with whatever he can find around the house to create meticulously detailed scenes year after year.

Talbert’s love for Halloween came after spending several years helping his grandparents decorate for the holiday when he was younger. As he grew older, Talbert discovered he had a knack for envisioning and creating grandiose displays of his own.

“I usually have my theme for the next year before Halloween the year before,” Talbert said. “Around Christmas, I kind of brainstorm what I want it to look like, and after school gets out (for Christmas), I start working on it.”

This year, Talbert transformed his front yard into a scene from “The Wizard of Oz,” complete with a walk-through replica of Dorothy’s house, a yellow brick road and a pathway to the witch’s castle. He used clay and mannequin heads to recreate the movie’s scarecrow, tin man and lion, and used the house’s front door to display The Great Oz.

“I Googled everything in the movie to make sure everything was accurate,” Talbert said, noting he has watched the movie countless times over the past year. “I do get frustrated sometimes when I’m trying to build things, but it always comes together.”

Brooke Talbert said her son’s decorations sometimes create a mess in the house, but said it’s always worth it when she sees the final product.

“He never wants it to be scary. He wants it to be very family friendly,” Brooke Talbert said. “The older he gets, the more creative he gets. He never ceases to amaze me.”

While still finalizing his Wizard of Oz decorations on the day before Halloween, Talbert was already looking toward next year.

“Next year, I am going to do Jurassic Park,” Talbert said.