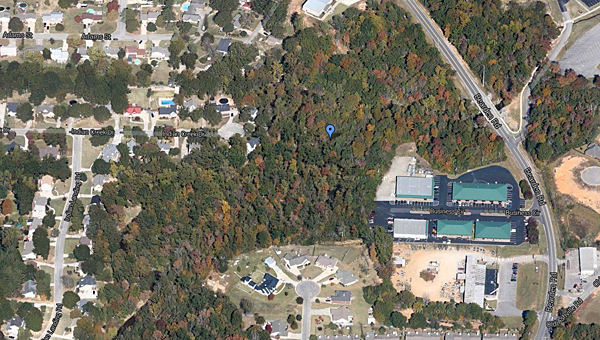 The Pelham City Council voted to accept the donation of currently vacant land off Bearden Road during its Nov. 4 meeting. (Contributed)

Pelham leaders said they plan to use two pieces of currently vacant property donated to the city by Office Park Partners, LLC for possible future development off Bearden Road near Pelham City Park.

During its Nov. 4 meeting, the City Council voted unanimously to accept two parcels of land totaling about 8 acres off Bearden Road. According to Shelby County property records, the total value of the two parcels is about $335,800.

One parcel of land follows the southern boundary of Buck Creek across the creek from a cul-de-sac on Indian Creek Drive. The land stretches behind a commercial development off Business Circle.

The second, smaller parcel fronts Bearden Road directly across from the entrance to Pelham City Park, and contains land on both sides of Buck Creek.

The donated land connects with an about 9-acre parcel of land the city already owns behind the Chase Creek subdivision, said City Council President Rick Hayes.

“This gives us the opportunity to do something interesting down the line,” Hayes said during the council’s pre-meeting work session, noting the city has no immediate plans to develop the property.

“All the buildings are gone, but the swimming hole is still there,” said Mayor Gary Waters.

FROM STAFF REPORTS CHELSEA — Professional bass angler Randy Howell will once again give away his fishing boat as part... read more