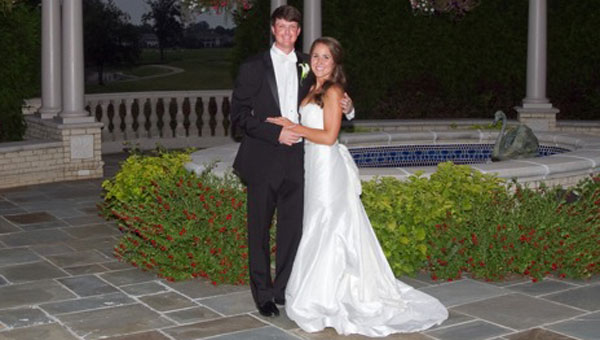 Carrie wore a custom designed fit and flare gown of ivory shantung silk created especially for her by Heidi Elnora Atelier, Birmingham. It featured an Alencon lace bodice with a sweetheart neckline. The crystal and embroidered belt tied into an exaggerated bow producing a lavish appearance from the front or back. The chapel length tulle veil was her “something borrowed.” The bride carried a bouquet of white and pink roses, vintage hydrangeas and white peonies tied with white satin ribbon.

The reception was held at Wynlakes Country Club where the bride and groom chose a menu reflecting their favorite foods. An artist captured the reception with a live event painting as guests danced to music by Nationwide Coverage.

The magical evening ended with the bride and groom being whisked away for their honeymoon trip to Kauai, Hawaii. Mr. and Mrs. Strickler reside in Tuscaloosa.