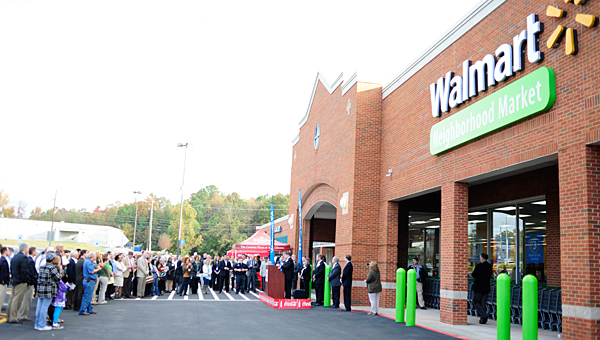 The Walmart Neighborhood Market in Helena opened its doors on Nov. 6. (File)

On the night before the Helena Walmart Neighborhood Market’s grand opening on Nov. 6, store General Manager Chad Armstrong was surprised at what he saw outside.

“Last night, we actually had folks trying to get in,” Armstrong said during the new store’s ribbon cutting ceremony at 7:30 a.m., drawing laughter from the about 100 store employees, city officials and customers in attendance. “We are looking forward to serving each of you. We truly want to be your Walmart.”

The grand opening brought the first tenant to the large former Winn Dixie grocery store building in the Helena Market Place shopping center since 2010, and marked the creation of about 100 new jobs in the city, said Helena Mayor Mark Hall.

“We’ve been working toward this for a couple of years, I know, dating back to the previous mayor and council,” Hall said. “The first thing we did (when we took office) was to hit the ground running and start calling folks.”

Walmart Neighborhood Markets are smaller than the retail chain’s traditional department stores, and offer more grocery-centered items. The about 50,000-square-foot store offers a full line of groceries and an assortment of general merchandise.

Hall said the store’s opening marked a “milestone” for the city, and said it will help boost Helena’s sales tax revenues while hopefully sparking further development in the shopping center.

“We have been lacking that retail base. We are extremely pleased, and hey, we want to hear those cash registers ringing this week,” Hall said. “This (store) will absolutely be a catalyst to fill the rest of this shopping center.”

Armstrong said the Helena store was the “most fun” Walmart he has opened, and said the store will work to give back to the community.

Man dies after being struck by vehicle in Helena

By NEAL WAGNER / City Editor A 60-year-old Helena man was pronounced dead after he was struck by a vehicle... read more