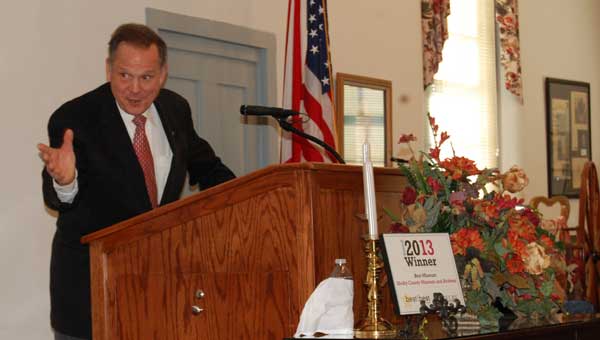 COLUMBIANA — Five men who served in the U.S. Armed Forces graduated from Shelby County’s first-ever Veterans Treatment Court Nov. 7 during an hourlong ceremony at the Shelby County Museum and Archives.

Veterans Treatment Court is a program that helps veterans who get in trouble with the law get back on track at no cost to taxpayers. Circuit Judge Bill Bostick, who presides over the Shelby County program, said honorably discharged veterans who have an addiction and/or mental illness, and has a minor criminal case pending in either district or circuit court can have their cases transferred to Veterans Treatment Court. Shelby County served as the pilot program in Alabama.  It is held every Thursday at 2 p.m. in courtroom No. 5 at the Shelby County Courthouse.

The success of Shelby County’s drug court and mental health court programs prompted a task force of public and private partners to approach Bostick about launching Veterans Treatment Court one year ago. Via a federal grant, Bostick and court staffers traveled to Buffalo, N.Y., home of the first-ever Veterans Treatment Court founded by Judge Robert Russell, for a weeklong training seminar.

“I didn’t have to be convinced that treatment courts worked,” Bostick said. “Today is about these gentlemen because they surmounted hurdles placed in front of them.”

Bostick asked the media not to disclose the names of the graduates to avoid retribution from employers.

Alabama Chief Justice Roy Moore, a West Point graduate and Vietnam veteran, was keynote speaker. Moore warned the graduates of temptations that lie ahead and urged them to pray always. “If you can’t rely on God, you can’t whip the devil,” Moore said.

“They are to be respected and honored their service to your country,” Moore said of the graduates. “They deserve another chance.”

Retired Col. Bryan Morgan and retired Staff Sgt. Allen Morrison served as the graduates’ mentors, and challenged the men to again do the right thing, as they did when they enlisted.

“Make your family, your fellow veterans and your country proud,” Morrison said.

Retired Rear Admiral W. Clyde Marsh, of the Alabama Department of Veterans presented each graduate with a certificate. He said Veterans Treatment Court not only benefits the veterans, but also the state.

“Veterans Treatment Court benefits our veterans, our judges, our corrections system, our court system and our community,” Marsh said.

Bostick concluded the program by presenting each graduate with a core value coin representing each branch of the armed forces and dismissing their respective cases. A standing ovation followed.

By DREW GRANTHUM/Sports Writer Anyone familiar with the Spain Park girls basketball program knows the Jaguars have a long-standing rivalry... read more