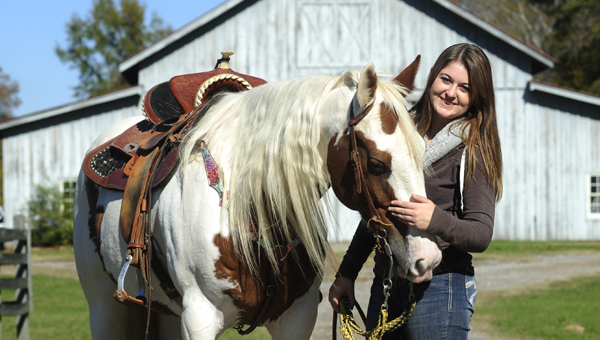 Brooke Bailey competes in rodeos with her horse Jaspur, who went blind in May. (Reporter Photo/Jon Goering)

CALERA – It was May 6 at a practice that Brooke Bailey noticed something wasn’t right with her horse. Bailey, 17, races barrels with her horse Jaspur, and that day it was as if Jaspur wasn’t seeing the barrels.

“On May 9, we took him to our vet in Pell City, and he did an ultrasound on (Jaspur) and showed us that his retinas are completed detached,” Bailey said of her 13-year-old horse. “(The vet) said he doesn’t know how he’s seeing at all, if so. He said it’s like he’s looking out of a pin hole in his top left eye.”

When she got Jasper on New Year’s Eve of last year, Bailey had already been told he could go blind within a year or two.

“When we got him, my grandfather told us that if he went blind, we were just going to have to put him down because nobody is going to buy a blind horse,” she said. “Most people say when they turn blind, they just get so dangerous and scared that you can’t do anything with them. So the day we found out that he was completely blind, I rode him almost in tears because I thought my grandfather was going to put my horse down, but luckily he didn’t do that to me.

“The vet just told (my grandfather) it’s going to be dangerous, but as long as he’s stopping when I tell him to stop, it’ll be okay.”

So now, at rodeos, Bailey guides her horse using her reins, noting he’ll run straight over a barrel if she doesn’t tell him where it is.

“If something happens, it’s my fault,” she said laughing. “This past weekend, we were running and I went around a second barrel, and I didn’t have (my reins) in my hand, so he just takes off running across the arena. He knew he was supposed to be running, he just didn’t know where because I didn’t tell him.”

But racing blind hasn’t slowed them down. Despite hiccups, Jaspur finished sixth in the state high school rodeo finals just one month after he went completely blind, and Bailey said it’s rare for she and Jaspur not to place in the top four at rodeos.

“But even if we don’t ever win or place again because of his eyes, I would be perfectly fine with that,” she said. “As long as I have him, I’m happy. He’s by far the best horse I’ve ever had.”