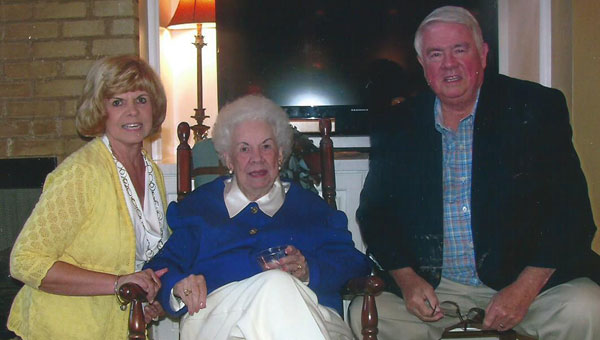 The community of Marvel was the childhood home of Bessie Warren Barclay. Her trip to school began each morning at 6:30 a.m. when she rode to Boothton to catch the bus to Montevallo.

“It made a long day” said Barclay. After high school, Barclay went to live with a sister in Fairfield and was employed with the Birmingham Gas Company as a “biller” for several years. During this time she met and married Marvin Hurt. Two children, Don and Peggy, resided at the home in Ensley.

Life changed in 1960 when Hurt died. The three-person family moved home to be with PaPaw Warren. He had been widowed and needed them as much as they needed him. Barclay’s children attended Montevallo schools and loved it.

In 1960, Lee Barclay, treasurer and business manager at the University of Montevallo, attended church with Bessie. Peggy had the idea in her mind that they would make a great couple.

“In 1968 I married Lee Barclay. He had five children – four in college and one in high school – and I had Peggy in college. It was hard and hectic but we managed okay,” said Barclay.

In 1977 after his retirement from the University of Montevallo, Lee Barclay was called to Agnes Scott College in Decatur, Georgia to become their treasurer.

Throughout the years, square dancing was their favorite pastime. They were into competitive square dancing and performed on cruises and in the Hawaiian Islands.

Eight years later, they returned to their home in Montevallo and spent many happy and eventful years until Lee passed away in 2003.

As a member of Eastern Star, Montevallo Garden Club, Home Demonstration Club and the Christian Womens Association, Barclay has had a full and energetic life. That life was celebrated last week with a 90th birthday party at the home of granddaughter Michelle Brakefield. Barkley was her usual interactive self, full of life and love for everyone.

A resident of Alabaster for 10 years, Barclay’s favorite thing to do is to eat out. “No dishes to wash,” she said.

Shaw greets friends with a smile

By SANDRA THAMES / Community Columnist Raised a country girl at her dad’s homeplace, Mattie Sue Shaw was one of... read more