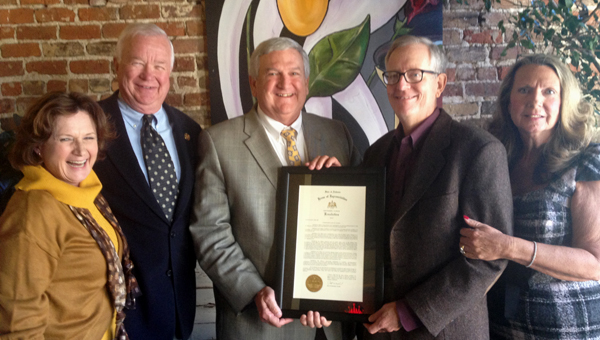 COLUMBIANA – John Ellison, who served as the Shelby County 911 executive director for more than 20 years, thought he was just having lunch with good friends last Wednesday. Little did he know that state Rep. Mike Hill would also honor him with an Alabama House of Representatives resolution.

“I had no idea,” Ellison said of his lunch with Hill, Shelby County Sheriff Chris Curry, former coworker Sally Cox and his wife Jane at Bernie’s on Main in Columbiana Nov. 13. “I just thought it was lunch. I was very surprised, very honored.”

After serving as a patrol officer, sergeant and lieutenant with the Pelham Police Department beginning in 1976, Ellison became the first executive director of the Shelby County 911 Center in 1990, where he was responsible for starting a new 911 system, coordinating an upgrade of equipment at the center and directing a move to a new facility in Pelham in 1999, according to the resolution. He retired as executive director in 2010.

Hill said Ellison’s biggest accomplishment was being able to convince municipalities in the county to join the system, which created a streamlined countywide system for 911.

“John pretty much revolutionized the state of Alabama on 911,” Hill said. “People were coming from all over the United States to see how we had done it. He’s just a real innovator and a quality, quality person.”

Cox said she approached Hill about recognizing Ellison with a resolution because of his innovative role in the transition of 911 calls from landlines to cell phones.

“(Ellison) dedicated himself to making this system grow from an idea (to something) that will take us far into the 21st century,” she added. “I’m just so very proud, and I’m humbled to have gotten to work with John and his group at 911.”

“It’s a real honor,” said Ellison of both the award and the resolution. “It was a privilege to serve the citizens of the county, and it meant a lot to me personally to be recognized.”

By NEAL WAGNER / City Editor Pelham’s new hockey director said he has hit the ground running over the past... read more