Usbaldo Arguello-Vasquez, 20, of Montevallo was arrested and booked in the Shelby County Jail Nov. 16, where he is currently being held on a $30,000 bond. No court dates have been set at this time. 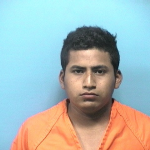 If convicted, Argeullo-Vasquez could face between two and 20 years in prison.

By CASSANDRA MICKENS / Associate Editor HOOVER — The power of Facebook has led to the arrests of three men... read more