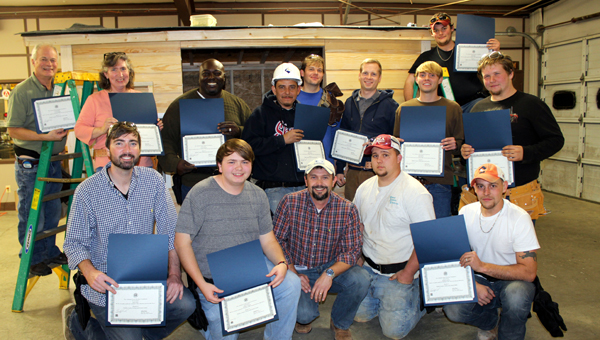 COLUMBIANA – Thirteen adults graduated Nov. 19 from an eight-week construction certificate class held at the Shelby County College and Career Center, which was sponsored by the Home Builders Association of Alabama and the Shelby County Board of Education.

Shelby County Schools career tech coordinator Rene Day said previously the class came about as a result of studies that showed spikes in the construction industry. The Home Builders Association underwrote the cost of the hands-on, project-based class to help prepare workers for possible jobs in carpentry.

Tom Edwards, a teacher with the building sciences program at the College and Career Center, taught the class on Tuesday and Thursday nights, spending about an hour each night teaching theory and two hours each night working in the shop with students. The students built an 8-by-10 foot storage shed during the eight-week class, Edwards said.

“Step by step, we’d go over (how to build the shed) in class. Then we’d go out in the shop and do it,” Edwards said. “We went from the foundation to the siding to the roofing to the windows. We did a little bit of everything.”

The youngest participant was “fresh out of high school,” while the oldest student was 67 years old, Edwards said. Participants hailed from Shelby, Chilton and Jefferson counties and ranged in experience levels, he said.

“About half the class actually does construction for a career,” Edwards said. “They were just looking to better than skills. They built a good camaraderie together as far as a class goes. I could take the students who had a little bit more experience, and they would help me with the ones that didn’t have any experience.”

Participants were award certificates, tool belts and tape measures at the Nov. 19 graduation ceremony. Another class will be held in the spring, Edwards said.

“We were the pilot program, and it turned out to be a successful program,” Edwards said. “They’re wanting to implement it all over the state.”