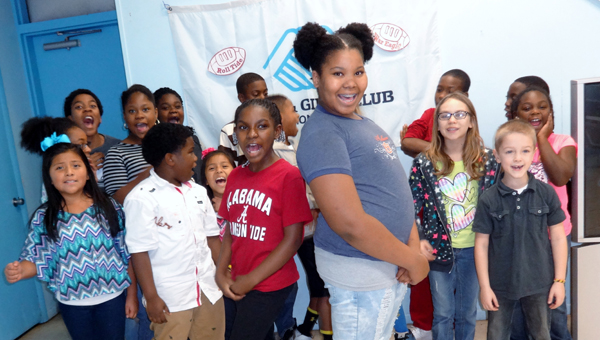 MONTEVALLO – Fifth graders Alyse Jones and Kayce Sankey are friends, but they are also competitors. Representing the Boys and Girls Club of Montevallo, both girls were recently named semi-finalists in the national Triple Play Fit Family Challenge, in which they are competing with their families to improve their overall fitness and nutrition.

Freda Shivers, director of the Boys and Girls Club of Montevallo, said the competition is a week-by-week contest that requires families to send in journals, photographs and other data to the national office. Families are given healthy eating instructions and physical challenges weekly, which they are to perform and document, she said.

This week, families were asked to try a new, healthy breakfast. Other weeks, participants were asked to drink six to eight glasses of water per day, track “color groups” (or their fruit and vegetable intake) and participate in physical challenges, Shivers said.

The weekly activities culminate in the final competition, which will be held in Los Angeles and will involve five of the 25 semi-finalists being given an all-expenses-paid trip to compete against other finalists for a grand prize. Last year, Olympic medalist Jackie Joyner Kersee led the final phase of the competition, and the winning family won a family vacation to the U.S. Olympic Training Center in Colorado Springs, Colo.

While only one family will be selected from each region, Shivers said she has encouraged the girls to work together and include other Boys and Girls Club members in their fitness challenges.

“Sometimes, I think we’re just little old Montevallo. We can’t win. But we did (win) once,” said Shivers, referring to the photograph contest her daughter, Xan, won this summer.

“There’s no reason we can’t do it again,” she said.

The second phase of the contest ends Dec. 2, and finalists will be announced shortly thereafter. For more information, visit Bgcatripleplay.typepad.com.

Students at Riverchase Elementary School have their copies of “TJ Put Your Phone Away,” a book by Erin and Blake... read more